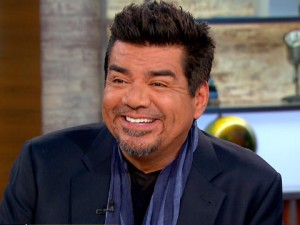 In a deal with Lionsgate TV, FX has picked up Saint George, a comedy set to star George Lopez, for a 10-episode initial order. Should the episodes perform at a pre-determined ratings level, the show would receive a 90-episode back order to be rolled out over the next two years. To be executive produced by Matt Williams (Roseanne), David McFadzean (Home Improvement), and Michael Rotenberg (It’s Always Sunny in Philadelphia), Saint George will air exclusively on FX until the off-network episodes start airing in broadcast syndication in fall 2015. The network achieved a similar deal for Charlie Sheen’s Anger Management, which is currently in the midst of its 90-episode back order.

Saint George will star Lopez as a recently divorced working class Mexican-American turned successful entrepreneur. His character is struggling to balance his demanding ex-wife, his 11-year-old son, his overbearing mother who just moved in, and his uncle, as well as his new role as a philanthropist “giving back” by teaching history once a week at a night school. No casting announcements have been made at this point.

“George Lopez is an incredibly gifted actor-producer and one of the most talented comedians in the business,” said Chuck Saftler, Executive Vice President, FX Networks. “The 10/90 model requires a unique individual who has the ability to pull off this kind of daunting schedule. George is that guy and we couldn’t be happier that he chose FX as the home for his new project. We’ve had a great experience working with Kevin Beggs and his team at Lionsgate as well as with Mort Marcus and Ira Bernstein at Debmar-Mercury, and are thrilled to expand that relationship.”

Lopez said, “I’m excited about my new show, couldn’t think a better group of people or better place to create than FX…..Now to get ready… Back to Pilates!”

Lionsgate Television Group President Kevin Beggs added, “In the tradition of George’s frank and fearless standup comedy, Saint George will reflect his no-holds-barred comedic take on the tensions surrounding race, class, sex and family life in Los Angeles through the eyes of a man straddling two separate cultures. George is an extraordinary talent and we are privileged to be working with him and with Matt and David, who are responsible for some of the most successful television comedies ever produced.”

This will be Lopez’s first starring role in a sitcom since his ABC comedy George Lopez was canceled in 2007 following a successful five-season run. He has since hosted Lopez Tonight, a talk show on TBS that lasted two seasons.

Will you be watching Saint George? Are you happy to have Lopez back in a sitcom? What do you think about the 10/90 deals that have become more prevalent in the television industry?