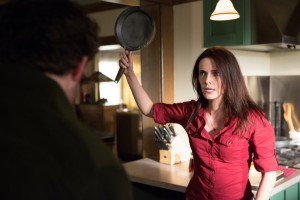 Juliette’s recovery from her coma found her feeling a little behind the eight-ball, as she had to digest months of information about Nick’s identity as a Grimm and all the implications therein while struggling to return to her everyday routine. As such, she feels the need to insert herself in the Grimm goings-on that he deals with day in and day out, a sort of Grimm immersion program where she learns on the fly and tries to make his life a part of her life rather than running from someone she loves. However, feeling as if she’s constantly behind or not where she should be as far as knowing about Nick’s past and the Grimm experience forces her to reach out to Nick’s mom in a bid to find out everything he’s not telling her about being a Grimm.

Listed below are the dates, titles, and descriptions of the next two episodes of Grimm.

Friday, January 17th – “Eyes of the Beholder”
Nick (David Giuntoli) and Hank (Russell Hornsby) are called to the gruesome murder of a veteran working in home security. During their investigation, they discover this might be one of several revenge killings regarding a horrifying cover-up involving members of the army and military contractors. On the domestic front, Monroe (Silas Weir Mitchell) accompanies Rosalee (Bree Turner) during her long overdue reunion with her mother and sister. In Europe, Adalind (Claire Coffee) sees hints of what she thinks might be her powers returning.

Friday, January 24th – “The Wild Hunt”
Nick and Hank investigate a cop killer who scalps his victims. Meanwhile, Juliette (Bitsie Tulloch) begins to communicate with Nick’s mom via email and Adalind finds herself much closer to delivering her baby than she previously thought. Elsewhere, Monroe’s parents (guest stars Dee Wallace and Chris Mulkey) decide to surprise him and Rosalee with an early arrival to Portland after learning some exciting news.

What will Juliette find out from her communication with Nick’s mother? Will Nick be able to forgive her for going behind his back in order to speak with a part of his past he might not be comfortable sharing? How will Adalind handle her advanced gestation?