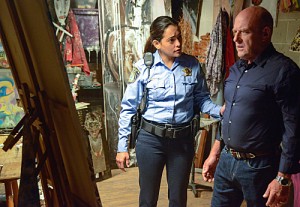 CBS has announced that the second season of breakout summer hit Under the Dome is set to premiere Monday, June 30th at 10:00, while upcoming science fiction series Extant, staring Halle Berry and produced by Steven Spielberg, will make its bow Wednesday, July 2nd at 9:00.

The move toward providing more scripted programming in the summer, and something of a year-round schedule, is something that the broadcast networks have been moving toward over the past couple of years, but thus far, none have had anywhere near the success that CBS had with Under the Dome. Despite the novel’s reception, it was still something of a shocking performance, considering that the show is outside the network’s content comfort zone and put up numbers during the summer that many shows during the season would kill to hit or even come near. As such, it makes sense that CBS would want to strike while the iron’s hot and continue delving into limited-run drama programming, but the decision to keep Under the Dome at 10:00 and not use it to give Extant a boost is a curious one; they may not sound like sister shows or anything, but when you get this once in a blue moon type of success, you use it to foster other success and then worry about expanding nights.

Under the Dome will have its second season premiere, which promises the deaths of two series regular characters, penned by Stephen King, whose novel provided the inspiration for the series. This past summer, Under the Dome became summer’s #1 program, averaging 15.06 million viewers and 3.9/11 in adults 18-49, ranking as the most-watched scripted summer series in 21 years.

One of the hottest properties of the development season, Extant tells the story of a female astronaut (Berry) who has to adjust to life on Earth after spending the last year in space. Also attached to the series, created by Mickey Fisher (The King of Iron Town, Summer Nuts), are Camryn Manheim, Pierce Gagnon, and Hiroyuki Sanada.