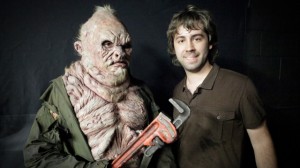 In the world of Face Off, your chance of taking home the title relies heavily on who you pick for the final challenge. Should you go with people you’ve worked with before or who complement your design aesthetic, you put yourself in a much better position to win, whereas selecting helpers who don’t get along or those who don’t get what you’re trying to do can derail even the most promising of seasons. It may not seem fair for an entire season to potentially rest upon other people rather than yourself, but the most important ability one can have when entering the competition is the ability to delegate and lead efficiently.

On the season finale of Face Off, Anthony has selected Eric Z. and Autumn to be on his team and the two are having trouble with a mold. While it’s nice to see that the former enemies have been able to put their past altercation aside for the sake of Anthony’s chances, they might not have been the best choices to earn him the position as a guest lecturer at the Make Up For Ever Academies in New York and Paris, the 2013 Fiat 500, and $100,000. Both have their positives, but Eric’s inexperience and Autumn’s inability to take direction could lead to Team Anthony imploding before their designs make it to the stage of Le Reve at the Wynn.

The two-part season finale of Face Off finds Anthony, Wayne, and Kris having to design waterproof makeups that can withstand an intensive, aquatic Vegas show, so a messy mold might not be the end of the world. If it comes out not looking ideal, it can be patched up, though the paint job and waterproof will become that much more important. With the final three being as close as they are, every little tear and imperfection will be intimately examined and the judges will have to decide how they’re going to look at the finale creations. How much weight will be put on completing the task vs. the season as a whole when decided who takes home the title?

The fourth season finale of Face Off airs Tuesday at 9:00 on Syfy. The show has already been renewed for a fifth season, which is set to premiere this summer.

Who do you think will win this season of Face Off? How do you think season four has compared to the previous three? What do you hope to see from the fifth season this summer?