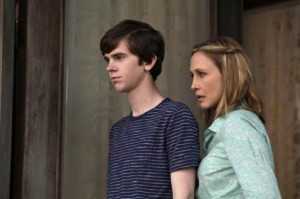 Whether he likes it or not, Norman is now stuck in White Pine Bay with his mother. He may not have wanted to move from Arizona to begin with, but after they sunk their money into the motel, he and his mother are pretty handcuffed right now. In leaving home following the death of his father and her husband, they thought that White Pine Bay would be a fresh start, a way to live a calm life without the stresses of big city life or reminders of their lost loved one. But now another tragedy is tied to them, one that is less about feeling the emotional loss of someone important and more about worrying for their personal safety and whether the body they sank in the Bates Motel pilot would resurface.

On the next episode of Bates Motel, Norma and Norman are drawn into the secrets surrounding White Pine Bay, the little spot on the map that held so much promise before they arrived. The allure of a small town proved to be too much for Norma to pass up; she would have an easier time getting on her feet and Norman would be safer in a school that could give him more personal academic attention as he nears college age. They’d have a scenic view from the motel that could provide the calm missing from their lives, calm that evaporated once the body was found in the garage. But White Pine Bay isn’t the small town utopia that Norma wanted to provide for her son. It’s a place with hidden darkness and more going on than she realizes, but how long will it take for her to piece together that something’s not quite right?

Elsewhere on Bates Motel, Norma’s other son Dylan has arrived in White Pine Bay, disrupting what peace and quiet Norma and Norman have been able to build following the incident.

What did you think about the first episode of Bates Motel? How will the arrival of Norma’s other son affect things at the motel? Are the secrets in White Pine Bay dangerous enough that Norma and Norman should consider moving?