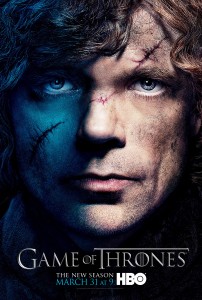 While I wasn’t looking, there was yet another trailer posted for the upcoming season of HBO’s Game of Thrones. It’s difficult to avert your eyes for even a moment lest you miss more scenes, and let’s be honest, we all want to see more, more, more before the saga beings on March 31st!

What do we learn from this trailer?

Tyrion and Cersei sharing a discussion about how long the warring will last. Tyrion notes there are “Seven kingdoms all united in fear of Tywin Lannister.” When he wonders how long it goes on, Cersei tells him, “Until we dealt with all of our enemies.” That’s a long time if you’re a Lannister.

Elsewhere we see Stannis certain that darkness will consume them all unless he triumphs. Thanks, Melisandre, for giving the guy a big head.

Poor Sansa is still acting accordingly on the arm of King Joffrey, who otherwise is stomping his feet and shouting “I am the KING. Everyone is mine to torment.” Cersei must be so proud. At some point, we’re going to realize how embarrassed she is by her son, but she plays the dutiful mother just as well as Sansa plays the dutiful…fiancee? Anne Boleyn, er, Margaery, hasn’t yet found her way to Joffrey’s side, but she make a brief appearance in the trailer, thereby setting the stage.

Jaime and Brienne continue their sword fight on the bridge. For all the promotion that particular scene is getting, it had better not last a mere 20 seconds and I expect Brienne to show Jaime a thing or two about how dangerous she can be.

Jon Snow is still off fighting someone with Ygritte. This time she’s playing the role of Katniss in The Hunger Games (archery is all the rage!) and darkness is enveloping the North as they do their damnedest to stave off the beasts who have found their way around the Wall.

Daenerys is totally bad-ass and confident with her dragons, this time she’s go a fire-breather at her side and she’s asking exactly how someone would prepare to defeat them.

For the full video and to pique your imagination further, watch and whet your appetite.