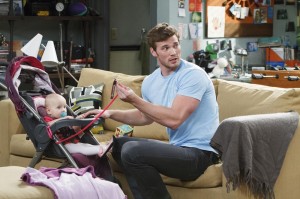 Danny and Riley have gotten close to being honest about their feelings for one another several times this season on Baby Daddy, only for something to keep them from going all the way. Either Danny has somebody, Riley has somebody, the timing isn’t right, or one is too scared about what the effect of a confession would have on their extremely tight friendship; so, despite there being mutual feelings and a foundation for what could be a wonderful relationship, they’ve been pushed apart by the universe and have begun taking this as a sign that maybe now’s not the right time. Coming up on Baby Daddy, after a tragedy strikes, Danny makes an attempt to get Riley back out into the dating world, but is that such a wise move right now?

Wednesday, July 17th – “Never Ben in Love”
Riley plans to break up with Fitch, but then receives the news that Fitch is dead. She meets Fitch’s dad, Winston Douglas (guest star Diedrich Bader), who asks her to deliver the eulogy at the funeral and tells Riley that Fitch planned to propose to her. Meanwhile, Ben realizes he might be in love with Megan (guest star Grace Phipps), but she thinks things are moving way too fast. Tucker embarks on his “Tucket” list of things to do before he dies and Bonnie schemes to catch the eye of Fitch’s wealthy dad.

Wednesday, July 24th – “All’s Flair in Love and War”
Tucker’s girlfriend Vanessa lands an assistant manager position at Ben’s bar and makes Ben’s life miserable with ridiculous hours and a new uniform. To appease his friend, Ben agrees to try to get along with Vanessa, but when she threatens his job, Ben seizes on an opportunity to get back at her by ruining a big event she’s planning. Meanwhile, Danny attempts to set up Riley with a hot new teammate Gerard (played by Antonio Sabato, Jr.). Little does he know, Gerard really has eyes for Bonnie.