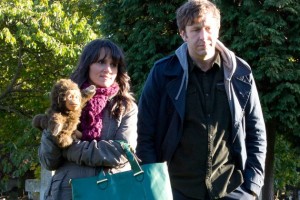 When Tom Chadwick originally came to California, he didn’t know what to expect, never having been in the United States before. What he found here was an eccentric family who helped him get a better understanding of the Chadwick name, a plethora of experiences that he can proudly take back to England, and Ally, someone who provided him with the companionship needed after the breakup with Sarah. It’s been a rewarding, informative trip for Tom, exactly the right thing he needed to break out of the funk that he had been in, but how would his time in California come to an end?

On the next episode of Family Tree, Tom gets thrown a farewell party by Al and Kitty and while all the prerequisites for this type of affair are present, it’s also the site where dark secrets about the Chadwick family will be exposed and his relationship with Ally will reach a turning point. This brings up the question of whether or not Tom will even return to England, considering that the secrets he learns may inspire him to continue searching for his family history. Things with Ally have also been going well enough to where staying in California for an extra while could give them a chance to take things slower and get to know one another better, something they haven’t been able to do in the compressed time frame he’s currently working under. But would he consider delaying his return to England for someone he doesn’t know well?

Elsewhere on Family Tree, Pete and Bea’s final day in California doesn’t go as they expected when Monk goes missing at the beach. Will Bea have to say goodbye to her longtime friend?

The season finale of Family Tree airs tonight at 10:00 on HBO.

What do you think Tom will find out about his family during the farewell party? Will he opt to stay in California and get to know Ally while continuing to dig into his family history? Where will Bea find Monk?