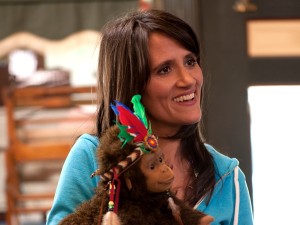 Tom’s time in Los Angeles has produced a fair amount of results in his search for information about his family’s past. Last week on Family Tree, he learned that Charles Chadwick wasn’t responsible for the death of Abraham Lincoln; he left the United States simply to be with Virginia, since their families didn’t approve of them being together. It was a sweet ending to a tale that could have been equally as scandalous or salacious, but as romantic as the beginning of Tom’s time in England were, there’s still the matter of pursuing why Charles and Virginia couldn’t be together. During the 1860s, what could keep a D.C. boy and a Virginia girl from pursuing the life they want to live?

On the next episode of Family Tree, Tom is in his final two weeks in America and gets a visit from Bea and Pete, who accompany him to an Indian reservation to trace the Chadwick Native American connection. Rebecca Chadwick may have been Native American, which would help explain the resistance that Charles’ family offered to their relationship, and the trio journey to meet Chief Running Bull and White Feather, an elderly shaman, to get in touch with that side of the family. Thus far this season on Family Tree, Tom has participated in a pantomime horse race, attended a Civil War reenactment, and made the trek to the United States, but will his time at the reservation be the thing that grants him the epiphany he’s so desperately after?

Elsewhere on Family Tree, Tom rents a convertible and meets Ally for lunch, while Mr. Pfister calls with a new lead for Tom to follow regarding his roots and the quest to unlock the secrets of the Chadwick family.

What do you think Tom will find out from Mr. Pfister? Is there a chance that he’ll continue his relationship with Ally once he moves back to England? How will the time with Running Bull and White Feather go?