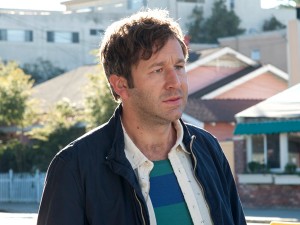 Tom’s venture to California has turned out to be a fairly positive thing thus far, in terms of finding out information about his ever-growing family tree. While he’s not gotten close with Al, Kitty, and Rick yet, he’s learned that the reason Charles came to England in the first place was due to his involvement in the assassination of Abraham Lincoln, a mind-blowing revelation that changes the way Tom looks at both his family history and his own past in England. It also brings up many more questions for him to find the answers out to and that means he’ll be staying in California for a little while longer, so on the next episode of Family Tree, he decides to join Rick at a local Civil War reenactment.

Aside from the irony of doing something Civil War-related after finding out that his family helped kill Lincoln, the battle is something that could help Tom learn more about the history of America and, by extension, his cousin Rick, who he’ll be spending a fair amount of time with during the reenactment. Right now, that may be what he needs most, time to figure out who his family members are and how he can best relate to them; Tom came to America looking for another perspective on the Chadwick family name and he’s found a good start in Al, Kitty, and Rick. But in order to get the most out of his time abroad, he has to get to know them better.

Elsewhere on Family Tree, Tom meets a woman named Ally he shares a mutual attraction with, while he receives a phone call with news from England during the battle.

How do you think Tom’s time at the Civil War reenactment will go? What type of news do you think he’ll hear from England? Will he opt to stay in the United States and get to know not only his family, but Ally, as well?