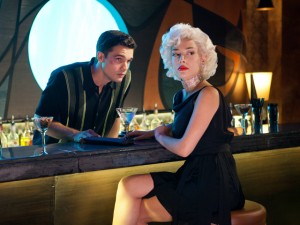 Sy Berman is in town and visiting Ben in a tulip greenhouse to avoid detection. After he informs The Butcher that Ike is not to be harmed until the gambling bill goes through, he gives a warning that people high up in their organization know that Ben has been taking the lion’s share of profit from his ventures in Miami. To get the spotlight off of his empire and avoid making those above him in rank even madder, Sy advises Ben to give a more sizeable cut from now on. Before departing, the Chicago mob boss fills Ben in on the rise of Nicky Grillo, a Tampa-area gangster who’s slipped into Miami right under The Butcher’s nose and purchased a warehouse. If Ben doesn’t wake up and, to paraphrase Sy, get his face out of Lily’s private parts, he’ll let everything he’s fought for fall in around him, all because he chooses to follow his id rather than listen to his ego.

Meanwhile, Vera and Ike are preparing for Passover Seder the following night and the subject of Minneapolis Mutual and Ike’s deliberate deception comes up. Vera is upset about having to find out about their financial status and the identity of their silent partners through the meeting she had in the season premiere, while Ike reminds her that she’s never before cared about where their money came from and by becoming involved in the behind the scenes process, she’ll learn some harsh truths. The issue of trust remains between them, as Vera’s people are taught that lying is a virtue and Ike’s are taught that you do what you have to in order to protect the ones you love.

Stevie and Lily head out to a club in Overtown for an official date now that Ben is in Chicago for the night. The two start getting hot and heavy, only for a fight between Bel and another man to erupt over gambling debts. Stevie gets involved and, while taking a shot to the face, manages to subdue the situation and get Bel out of trouble. On the way to the car, Bel chastises him for not sneaking in quietly and opting for the “what’s going on?” approach to being his backup; before he can continue, the man he got into a fight with quickly approaches their vehicle with a gun drawn. Stevie grabs Bel’s gun and shoots him, someone that Bel calls a cokehead that could use the wake up call that a shot could provide. However, Stevie remains numb about the situation, even when spending the night with Lily.

While Ike’s gotten a major confidence boost thanks to his Cuban plan, despite the apprehension from Sid, Ben is fuming about Sy knowing the logistics of Nicky Grillo and blames Bel for the lack of information. He charges the bookie with learning what Grillo’s up to and stabs a member of his staff out of frustration for his current situation and the way he looks to those in charge. Ike catches the last bit of Vera’s meeting with her show’s choreographer and informs her that he’ll be leaving town soon for a brief trip to Havana under the guise of looking at hotels. She puts her trust in him, obviously a cue from their earlier conversation.

Former Cuban rebel El Tiberon checks into the Miramar and vouches for the fact that Vic’s wife Maria, who died during the first season, ended her life with her husband’s name on her lips. She was behind El Tiberon in line when Castro’s men came and since the dictator won’t release the body, there’s no way for Vic to find peace with a proper burial. Ike vows to bring back Maria’s body from Havana to soothe Vic’s soul and later meets with Percy to offer a deal; he’ll give the agent access to El Tiberon’s suite and tap the phone, thereby aiding in the pursuit of Castro, if he’s allowed to go to Cuba and get Maria’s remains. Both Vic and Mercy are out of sorts without Maria, him staring endlessly at old photos and her quitting Pan Am after working so hard to get aboard, but Fidel doesn’t want the body to go to the States in its current condition, chock full of bullet holes. If word got out what happened to Maria, she would become a martyr and rally fellow Cubans to overthrow him.

At the Miramar, Ben and Senator Sloat are receiving massages when the impending gambling bill is brought up. Ned promises to use his connections to get it passed, which would allow Ben to take Ike out for good. Elsewhere, Judi Silver makes her return to the hotel and has a run-in with Stevie, who doesn’t take too kindly to her insinuations of spreading word about his affair with Lily. Of course, she’s merely kidding and after he compliments her performance in the courtroom, she gets him to set her up with a client, an Iowan beauty supplies rep named Tommy. He’s quickly arrested for solicitation and Judi gets threatened by Doug, causing Stevie to come to her aid.

Ike goes to Meg and invites her to the Seder that Vera is throwing. She accepts and the two reminisce about the first time they met, at a Christmas charity where he was the cabana boy and she could hardly contain her attraction. However, the two couldn’t be together due to the times they were living in and that connection has carried them through present day, where he still remembers the color of the bikini she was wearing at the time.

The Seder doesn’t get off to a good start when Arthur and Inez are 45 minutes late and Stevie and Danny don’t seem to want to take the ceremony seriously. When Meg brings up that Lauren is wearing gloves from her biological mother, Vera begins the Seder, with Arthur and Inez arriving much later. They bring a much shorter reading than the one Vera planned to include and the rest of the ceremony goes fairly well.

Ben has invited Nicky to his home for a party featuring coke, women, and alcohol and introduces him to Lily, who Nicky compares to Ava Gardner. It turns out, though, that Nicky was the last boyfriend Lily had before she became involved with Ben and she disappeared rather than formally breaking up with him. He calls her decision “moving up the food chain” and while confronting her as she got more wine, scares her to prove that he still has that type of control over her. Later, there’s a group of naked women on Ben’s bed while he’s looking through the glass above at them, reciting a portion of a poem about the angel of death before urinating on the glass.

Additional thoughts and observations:
-The poem that Ben was reciting in the closing moments of the episode was “The Destruction of Sennachreib” by George Gordon Byron. You can read the full thing here.
-Also, the song that was being performed in the club Stevie and Lily were in was Ike & Tina Turner’s “I Idolize You”.
-Aside from a few animated shows, I can’t remember a Passover Seder playing a prominent role in an American television series, so kudos, Magic City.  It was an interesting cultural detail and I’m always a big fan of big events that bring casts together and lets them bounce off of one another.
-So, how great was James Caan in his greenhouse scene? The presence of his character helps keep the show (and the idea of Ben Diamond) fairly grounded in reality, while his performance was so lively and entertaining. The line about the mermaid, him calling Ben a pelican, and the gardening tips were all delightful.
-Favorite shot: the beat when Stevie realizes the man he fought in the bar was approaching the car with the gun. The entire series of Magic City has beautiful art direction and cinematography, of course, but I thought that was especially well done. I also thought the final sequence that revealed Ike on the plane to Cuba was interestingly done.
-I don’t think I was supposed to, but I found Ben stabbing his employee’s hand amazingly funny in its randomness and, upon reflection, its exact alignment with who he is as a businessman and a person.
-Judi Silver remains the best, thanks to her interaction with Stevie and the “trick question” pun that she made.
-Although I know that Ike loves Vera, I can’t help but think that the growing distance between them, coupled with the fondness between Ike and Meg, will eventually lead to him straying with his silent partner.
-We met the woman who can crack a walnut with her labia. I hope this fact plays a role later in the season, just because.
-Next week on Magic City: Ike goes to retrieve Maria’s ashes in Cuba, while Vera struggles to make it through dance rehearsals.