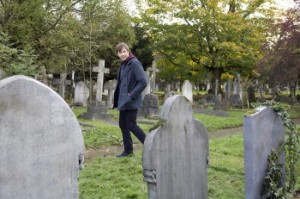 The more Tom Chadwick finds out about his familial lineage, the deeper he wants to dig. The family tree project began as a diversion from the fact that his life isn’t where he wants it to be, but now, it’s become something he’s fully immersed in and drawing inspiration from. Now that he has information on his boxer grandfather and actor great-grandfather, it’s time for him to learn a little more about his cousins, which he will on the next episode of Family Tree.

After finding out about family in Maryland last week, Tom has been informed of the existence of cousins in both Derbyshire and California, leading him to bring Pete, Keith, Luba, and Bea along with him to visit the former. Once at the Chadwick farm, complete with alpacas, family truths are revealed and Tom deliberately tries to uncover a family secret while exploring life in the countryside, which he’s never experienced before. The experience of searching for information about who his family is, where they are, and what decisions have been made that got him to this point has gotten Tom to think about ways he can change his life and extend the limits he puts on himself. Even though he’s not likely to move to the family farm and begin raising lifestock after years in the city, just exposing himself to something so different should be good for Tom and help him continue the pattern of growth that he’s exhibited since his journey began.

Elsewhere on Family Tree, Tom finally has a job interview, but will he be able to earn the position and take the first step toward putting his life back together?

Family Tree airs Sundays at 10:30 on HBO. You can check out spoilers for upcoming episodes here.

What type of family truths will be revealed in Derbyshire? Should the guys really be letting Bea (and Monk) drive? How do you think Tom will handle the possibility of journeying to America to meet with his cousin?