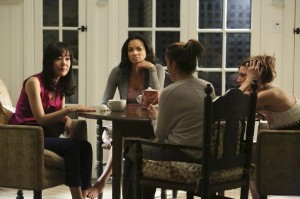 After the stress of the past few months of trying to conceive a child and the pain of Harry not letting her in after finding out that something’s wrong with his sperm, Savi gave in to her attraction to Dominic and cheated on her husband on the series premiere of Mistresses. It was highly out of character for the pragmatic career woman to let herself do something she know she wasn’t supposed to, but the decision to let herself go, even just this once, will have reverberations for the rest of the season, particularly when it comes to her relationship and just how truthful she’s willing to be. Would Savi be better off by being honest with Harry or is this a mistake that she shouldn’t own up to, for the sake of her marriage?

On the next episode of Mistresses, Savi doesn’t know how to play what happened with Dominic, so she turns to both April and Karen for advice and guidance. Unfortunately, she gets two very different perspectives, as April thinks that she should immediately tell Harry what happened while Karen feels as if Savi should hold a beat before going to her husband. Things are already tense enough around Savi’s house that Harry finding out about her indiscretion could lead to a separation (or even divorce), but in order to wait out the current storm in her life, Savi will have to live with the secret, something that could weigh heavily on her mind and negatively impact her life, not just her marriage. Is Savi a good enough liar to where she can keep what happened to herself until the time is right while not letting thoughts of her actions keep her awake at night?

Elsewhere on Mistresses, April begins investigating Miranda’s claim that Paul fathered her child before his death, while Joss gets closer to Alex than she expected and Karen refuses to let Sam Grey go, regardless of how inappropriate their meetings may be.

Mistresses airs Mondays at 10:00 on ABC. You can check out a recap of the series premiere here.

What did you think of the first episode of Mistresses? Can you empathize with Savi for how she felt about Harry shutting her out? Why can’t Karen distance herself from Sam Grey?