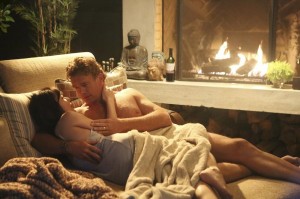 Savannah is a lawyer with a husband named Harry, with whom she’s trying to get pregnant. Thus, the two are trying to spice up their sex life to keep things from becoming too clinical, including a round of roleplaying in a hotel that leads them from the bar to a steamy lovemaking session in their room. However, things get awkward quickly as thoughts of which position would be more conducive to conception begin to creep around. Six weeks later, the two are going in for medical testing to see just what the problem is and why they’re not getting pregnant. Savannah hopes that it’s something wrong with her, claiming that it would be easier, and notes that Harry’s been coming home from the restaurant later than normal in recent weeks.

Savannah goes to the funeral of Thomas Grey, someone associated with her firm, where she runs into her friend Karen, who has been a bit out of contact recently. Her connection to Grey, a former patient of hers, is much racier than Savannah’s, as Karen spent the last six weeks having an affair with the married executive. She knew there was always something there between them, but once he mentioned that he was sick and realized that he was in love with her, she only wanted to be with him from then on. However, none of Karen’s friends know about Tom aside from the fact that she saw him as a patient, nor did Tom’s family know. In fact, they invite her to sit with them at the funeral and confide in her about how they’re feeling.

In particular, Tom’s son Sam seems to have taken an interest in the therapist, as he knows that his father was having an affair and wants to talk it out during a session. After the funeral, and once the Grey family clears out, Savannah, Karen, and Savannah’s sister Josslyn go to their friend April’s daughter’s birthday party where everyone tries to catch up. While Joss has been having an affair with her realtor boss and downloading sex apps onto other people’s (namely, April) phones, April is running her store and still hasn’t gotten over the death of her husband Paul, who passed away three years ago. She thinks he’s been calling and hanging up – not that he faked his death, but that his spirit is trying to tell her not to move on. However, April faces the possibility of moving on when a single dad of her daughter’s friend Madison arrives at the party and the two have obvious chemistry together. She embarrasses herself at first, but he shows up at her shop the following day and asks her out, proving that she might not be as rusty in all things dating as she thought.

Savannah and Harry go to their testing where it turns out she’s fine and his sperm has issues of low motility and morphology, meaning that the shape of the sperm makes it harder to reach (and fertilize) the egg. To help cheer him up and get some spark back into their sex life, she takes Josslyn to a lingerie store and tries to find an outfit for them to enjoy later that night. However, she gets a call from her co-worker Dominic that she has to be in the office for something relating to a case they’re working and has to rush out the door wearing one of the potential outfits for Harry. At the meeting, Dominic gets a tease of what’s underneath Savannah’s business suit when her skirt rides up, enough to make him ask to see her in it for a full 10 seconds. His inquiry came after Savannah tried to surprise Harry at the restaurant with the outfit, only to be rebuffed and made to feel foolish for wanting to be sexual during a time when he feels most emasculated, and Savannah only agrees when the time is cut to 5 seconds and she knows he’ll be doing the rest of the work for their case.

Josslyn and her boss Mac have sex in one of the houses they’re planning to show off and he informs her that a bid has been made on it – his bid. He wants the place to become their love nest, a home away from home where they can do whatever they want unimpeded by the threat of being caught by his wife. However, a lesbian couple make another offer on the house and Joss sees herself in the more submissive of the two, as she’s at the whims of her partner, who makes all the money and pays all the bills. Josslyn decides that she doesn’t want to be that kept woman that has to submit to whatever her lover wants to do due to not having a backup plan, so she decides to break things off with Mac and move into Savannah’s pool house for the time being. Granted, things aren’t good at her home, either, with Harry accusing her of being relieved not to have a baby, but for now, it’s all Joss has.

Meanwhile, Karen can’t seem to shake Sam Grey from her life, as he leaves a voicemail not long after the funeral and shows up unannounced at her office, wriggling into an empty appointment space. During their time together, he tells her of a fight he had with Tom before the old man’s death and how he found a letter that confirmed the affair he had been having. However, it’s not signed by anyone and not distinctive enough to pinpoint Karen; what Sam wants, though, is not to blame her or confront her, but to have a conversation about his father’s death. He had been told that Tom died alone and he wanted to know if that was true, because his inclination is that his father wasn’t alone and whoever he had the affair with was with him at the time. He also wants to know that Tom didn’t die hating him following their argument, something that could drive him crazy worrying about.

April and Madison’s father Richard agree to go out and mistakenly, she calls Josslyn first to help her get ready. This results in a beautiful red dress (with zipper slits) and a ton of glittery makeup, rather than the sea of paisley and floral chiffon that she usually wears, and a call from Ghost Paul. Savannah vows to get her PI to trace the number and find out who’s behind this, only before Karen arrives at April’s door crying. She had a conversation with Tom’s wife where she found out that Tom didn’t die alone – he died with his wife, who administered the lethal dose of morphine from the prescription that Karen gave out. While she thought that she and Tom were soulmates, Tom didn’t view her as seriously – he only looked at her as a mistress. Savannah feels like Karen should cut ties with the entire family, something Karen doesn’t want to do just yet, while Josslyn is more sorry for Sam and his emotional outbursts than she is for her friend.

The following day, Savannah’s PI Rick Anderson traces the most recent call to a hotel in the city and she takes April to confront whoever is behind the calling. They find a middle-aged woman, who claims that her young son has recently gotten curious about the phone and mistakenly called her. It’s then that April realizes she has to let go of Paul once and for all, no matter how badly it hurts. She makes up to Richard for canceling their date the previous night, though she doesn’t admit that it was over paranoia about her dead ex-husband, and the two schedule a date for that night to make up for it. Later, though, she gets a knock on the door – it’s the woman she met in the hotel, claiming that she was pregnant when Paul died and her son is Paul’s.

Karen takes Sam to the site of one of Tom’s greatest memories – the Little League field where his son made the game-winning play and won the championship. However, the memory is good because after making the play, Sam ran to his father to celebrate. Karen deduces that Tom knew that Sam loved him and didn’t go to his grave thinking that things were bad between the two. She then denies being the one he was having the affair with and the two hug, as Sam mentions moving on. He doesn’t move on, though, not from Karen. Sam shows up at her office the following day with flowers as a thank you for everything she did and invites her out to coffee in a personal, non-therapeutic capacity. That evening, she deletes every trace of Tom’s sessions from her archive.

Still hurting from her fight with Harry, Savannah goes to work where she runs into Dominic, who assures her that she doesn’t have to be strong with him. The two begin kissing and end up on top of his desk, acting on the sexual tension that had been bubbling between them for so long.

Additional thoughts and observations:
-So, hey, everybody. I’m not sure if I’ll be recapping Mistresses every week, so if you want to hear from me, be sure to click, share, and all that good stuff. I’ll be deciding based on the numbers.
-Although I liked the emotional content of April’s storyline, she doesn’t have caller ID? Or the internet? Or a phone bill?
-If there’s nothing else you can say for the Mistresses pilot, it was certainly slick-looking and full of beautiful stuff, whether it be the background, the buildings/houses, or the people. The opening few minutes looked like a lingerie commercial, though.
-There was a little too much telegraphing going on for my taste. I mean, this is a nighttime soap so I’m not expecting incredibly complex plotting, but from the first few minutes of each woman’s storyline, you knew that Savannah would hook up with Dominic, that Josslyn would recoil against her life as a kept woman, and that Sam would become obsessed with Karen. Considering what happened tonight, I’ll bet you guys $5.00 that by the end of the season, Harry has an affair with the redheaded hostess who apparently doesn’t know who Savannah is.
-Of the four, I was most interested in Karen, partially because I thought that Yunjin Kim gave far and away the best performance and partially because I would watch a show based around the premise of her character/storyline.
-My favorite moment of the episode was probably when Karen checked her security camera and found Sam at her front door unannounced. Creepy and deliciously soapy.
-The song below is what was playing when Savannah and Dominic begin their affair. You’re welcome.
-Next week on Mistresses: Savi turns to April and Karen about what happened with Dominic, while April investigates Miranda’s claims about Paul, Josslyn finds a friend in Alex, and Karen meets with Sam.