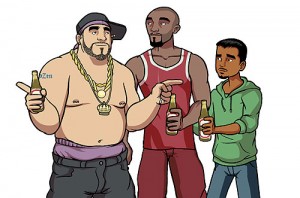 FXX has picked up its first original series in Chozen, from the producers of Archer and Eastbound & Down. The animated comedy, featuring voice work from the likes of Danny McBride, Nick Swardson, and Method Man, tells the story of a gay white rapper who gets out of a prison on a quest for redemption and domination and should debut in early 2014.

“It’s great to be in business with Grant, Danny, Jody, David and Rough House and this is the perfect first series order for FXX,” said Nick Grad, President, Original Programming, FX Networks and FX Productions.  “Chozen is an outrageous and ballsy comedy, but it’s also a very smart examination of the rap culture.”

An off-shoot of FX, new cable network FXX will make launch on September 2nd in 72 million homes and feature comedies that skew toward the 18-34 demographic, leaving 18-49-centric dramas (and a handful of other comedies) for FX. Making the move from FX to FXX are It’s Always Sunny in Philadelphia, The League, Legit, and Totally Biased with W. Kamau Bell, which will be converted from a weekly series to a nightly strip.

It should be interesting to see how FX and FXX schedule their programming and the extent to which they avoid stepping on one another’s toes. While the entire point of the split is to target different audiences, FX will still be airing comedies and likely against FXX, should the latter continue its mothership’s tradition of airing comedy on Thursdays. If so, Chozen might have to go up against Archer, which experienced strong ratings increases during its most recent season and could keep the former from fulfilling its potential.

Will you be watching Chozen? Do you think that FXX should go after dramas, as long as they’re appealing to the 18-34 demographic? Can FX successfully split into different networks and restock its programming shelves as a result?