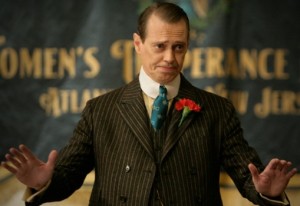 Though its summer shows have yet to make their debut, HBO has already announced premiere dates for its fall programming, beginning with the Sunday, September 8th fourth season premiere of Boardwalk Empire. The Emmy-winning period drama has its typical late September start pushed up by about two weeks due to True Blood‘s shortened sixth season.

Boardwalk will air by itself until Sunday, September 29th, when it will be joined by a pair of comedies. At 10:00 will be the final season of Danny McBride’s Eastbound & Down, which last aired in April 2012. The show was canceled following its third season only to be resurrected for the upcoming eight-episode fourth season, which is set to pick up several years following the events of the third season finale and finds Kenny living the American Dream with his family – in North Carolina.

Meanwhile, 10:30 will see the debut of Hello Ladies, a new eight-episode comedy starring Stephen Merchant as a gawky Englishman looking for love in Los Angeles, only to find that he’s not quite as charming and dashing as he thinks he is. In addition to Merchant, the show stars Christine Woods, Nate Torrence, and Kevin Weisman. HBO currently has another comedy about an Englishman in Christopher Guest’s Family Tree, which airs alongside Game of Thrones and Veep.

The five-episode final season of Treme, which aired with Boardwalk last fall, has yet to have a premiere date announced, though it could squeeze in after the comedies are finished with their runs in November. If it doesn’t, then it’ll get pushed to January 2014 and a pairing with Girls, seeing as how HBO has yet to slot a drama to air in the slot that Luck gave up in 2012.

Which HBO shows will you be watching this fall? Would you like to see Treme air its final season this fall or can you wait until early 2014? Are you already overwhelmed at how crowded Sundays this fall will end up being?