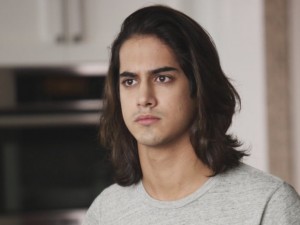 Reconnecting with someone after years of no contact can be difficult. The two of you are in much different places than you were the last time you spent time together and growing while apart can often lead to growing apart, so any initial interactions is often fraught with nerves and awkwardness. Is there a chance the friendship can be saved, that there’s still a little of what made things work inside each of you? Or have time and different life experiences drawn you far enough away from one another that things will never be the same again? On the series premiere of ABC Family’s Twisted, Danny Desai will be trying to figure out just how much friendship there is remaining between him and former friends Jo and Lacey after he returns home from a five-year stint in juvenile hall.

Listed below are the dates, titles, and descriptions of the first three episodes of ABC Family’s Twisted.

Tuesday, June 11th – “Pilot”
The premiere episode follows Danny Desai, a charismatic 16-year-old with a troubled past who returns to his hometown after spending five years in juvenile detention. Immediately branded an outcast, Danny attempts to reconnect with his two childhood best friends, Jo and Lacey, and to smooth over tensions with his mother, Karen. When a fellow high-school student is found dead in her home, Danny instantly becomes the prime suspect and the town spirals into a frenzy of suspicion and mystery.

Tuesday, June 18th – “Grief Is a Five-Letter Word”
As everyone at school tries to move on with the aid of grief counselor April (guest star Keiko Agena), Jo battles with her father over her friendship with Danny as she and Rico set out to prove Danny’s innocence. In an effort to show that he is a normal kid, Danny and Jo set up a dinner between their two families, which goes awry when the adults drudge up past grievances. Meanwhile, Lacey struggles to cope with her emotions and bristles when former ‘frenemy,’ Phoebe (guest star Brittany Curran), attempts to bond with her.

Tuesday, June 25th – “PSA de Resistance”
Jo decides to break out of her anti-social routine at school, which comes as a disappointing surprise to her devoted study buddy, Rico. When Jo and Danny volunteer to take part in an anti-drunk driving skit for the school’s Sobriety Awareness Day, Jo might get more attention than she bargained for, while Danny seeks out an opportunity to reconnect with Lacey. Meanwhile, as his case drags on and strains his relationships with Tess and Jo, Kyle is determined to track down a piece of evidence that incriminates Danny.

Will you be watching Twisted? Why do you think Kyle is so focused on incriminating Danny? Is there a possibility that people other than Jo and Lacey begin to believe that Danny’s innocent of the murder?