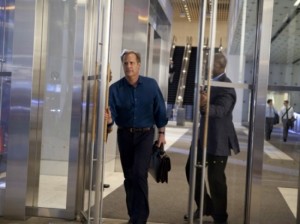 HBO has announced that polarizing Aaron Sorkin drama The Newsroom will be debuting its second season on Sunday, July 14th at 10:00. The show is once again paired with True Blood, which premieres its sixth season on June 16th, and should finish in mid-September, likely on the same night as the fourth season premiere of Boardwalk Empire.

While Boardwalk will put up fairly strong figures on its opening night, True Blood remains the network’s highest rated drama by a wide margin and could have given The Newsroom quite a few eyeballs for its finale. However, seeing as how True Blood only has 10 episodes this season, it’ll finish five weeks ahead of Newsroom, so while the journalism drama will receive the benefit of a True Blood finale audience, they’ll still have a while to go before finishing their season.

This season, the team from News Night is said to be chasing a mysterious tip that leads a story to spin out of control. Will they be able to get out in front of it? Sometimes in journalism, it’s not about things going well – it’s about knowing what to do when things are going haywire and having the skills to course correct. If News Night can find a way to manipulate the story to their benefit and show how strong they can be in the face of a crisis, it might not matter that the story got out of control. It might only matter that they were able to put a stop to it and show calm under intense pressure, which will earn them a tremendous amount of respect.

Will you be watching The Newsroom this season? Do you think that the show deserved the criticism it received last season? Is placing its finale behind the Boardwalk Empire season four premiere a wise decision?