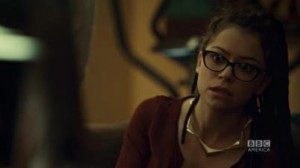 For two episodes of Orphan Black, Sarah has toed the line between being Beth in public and Sarah in private and around Felix. She’s adapted her accent, changed her appearance, studied the wrongful shooting case, and proved to be quite adept at thinking on her feet when faced with curveballs from those in Beth’s life. Even with everything that happened with Alison, Katja, and Cosima, it looked like she was close to getting the life she wanted with Felix and Kira, but is she in danger of being found out before any of that can happen?

On the next episode of Orphan Black, Paul arrives back home looking for clothes and nearly walks in on Sarah talking to Felix. Luckily, he finds a hiding spot in the closet while Paul and Sarah converse and eventually end up passionately kissing, meaning that he’ll likely have to wait before he can escape the house and head back home without being detected. If he was only a split second slower in making himself disappear, another hole would be poked in Sarah’s transformation into Beth; while she would rather Paul break up with her and get out of town, he’s obviously still in this thing and if he found another man in her apartment, he’d have to press her on who Felix was and how they knew one another, especially since he had never seen Felix before. Sarah hasn’t yet made a plan of what to do if someone from Beth’s life were to figure out that she wasn’t Beth, but considering what happens with Paul, maybe she should have one just in case.

Elsewhere on Orphan Black, Sarah might have to run once again now that the police have found the body she buried. Can she figure out a way to either alter evidence to point toward someone else or leave without casting suspicion on herself?

How much more careful will Sarah have to be if she’s going to continue living her life as Beth, given what happened to Katja? What would happen to her should Paul find out the truth about who she really is? Is Sarah going to have to leave her new identity behind once the police find the body?