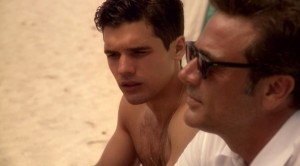 Rather than airing a new episode of Magic City next Friday, Starz has opted to re-air the first three installments of the second season, beginning at 9:00 on July 5th. Thus far this season, Ike has been backed into a corner by the continued presence of Ben Diamond and hatched a plan that could rid him of The Butcher once and for all – if executed to perfection. If something goes wrong or he doesn’t have enough time to change course, he might end up stuck with Ben, which would see the control he has over Miami all but vanish, particularly should the gambling bill pass as expected. Is there a chance that Ike regains his position as King of Miami and sends a message to other potential challengers by handily defeating Ben this season?

Listed below are the times, titles, recaps, and descriptions of the three-episode Magic City marathon.

9:00 p.m. – “Crime and Punishment”
In the Season 2 premiere, Ike faces a murder rap and his family tries to raise bail money, which leads them to discover just who his silent partners are. Meanwhile, Ben is concerned that Ike will fold under pressure and offers to help.

10:00 p.m. – “Angels of Death”
Ike’s dicey plan to rid the hotel of Ben Diamond is set in motion, while at the same time, Ben requests permission to put a hit on Ike. Later, Stevie and Lily go on an actual date; and Meg threatens Vera.

11:00 p.m. – “Adapt or Die”
Ike retrieves Maria’s ashes in Cuba and sets in motion a plan to rid himself of Ben, while Stevie gets more involved with the crime boss. Later, a sluggish Vera struggles to get through exhausting rehearsals and Stevie offers a peppy pick-me-up.

What have you thought about the second season of Magic City thus far? What do you hope happens during the remaining five episodes of the season? Will Ike’s plan to get rid of Ben work or is he stuck with The Butcher until one of them gets killed?