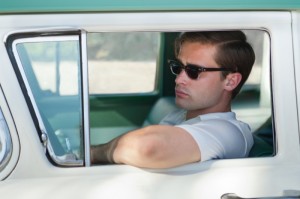 Ike has officially touched down in Cuba and after making a brief pit stop, heads for the Riviera, where he meets with Rafael, a man who works at the hotel and has a history with both Vera and Ike. He informs the hotelier that Havana has recently shifted its focus from girls to guns and that his people are (literally) being killed, aside from the financial hit they’re taking due to the failure of the casinos. The man responsible? Frank Sturgess, currently in the United States with Castro. Ike hints to Rafael that his main goal in coming to Cuba is taking control of the casinos and Rafael points his friend toward Minister Nunez, Frank’s boss and the person to see if Ike is serious about taking the job from Sturgess.

At the Diamond residence, Ben awakes, disgusted at the events of the night prior and the position he finds Lily in that morning. While he takes a steam, he tells her that he wants her to get back with Stevie, with Bel coming in right after to talk about the Nicky Grillo situation. Grillo and his men are responsible for lifting quite a few guns from the Tampa armory and intend to sell them to Cuban rebels looking to overthrow Castro, something that worries Ben, particularly when it comes to the state of their casinos and his standing with Sy. However, Ben shouldn’t be as concerned, considering that the weapons Grillo is trying to move are World War II-era and the Cubans he’s selling them to aren’t exactly impressed; they want Korean-era and a whole lot more at that, so for now, there’s no deal.

Ike’s meeting with Minister Nunez doesn’t go well and his attempts to persuade her to go into business with him by talking of the thousands of jobs that a hotel would bring go mostly ignored or rebuffed. However, before he leaves, she tells him that she’ll check him out and that a collaboration isn’t out of the question. Meanwhile, Ben suggests that they plant someone they trust near Nicky’s place and give the bust to the DEA, keeping their hands clean in the process and currying favor with the agency that could come in handy later. While at the Miramar, Stevie walks in on the meeting with Ben and Bel and the former talks of how impressed he was by how Bel’s life was saved. The Butcher inquires about Stevie’s ambitions, which are currently tending bar and waiting to assume the mantle of Miami King when Ike passes, and makes him an offer to work as the dealer in his weekly card games. Stevie would be able to collect around $1,000/week and he’d still be in the Diamond orbit, so he accepts and the first game begins right then, once Lily approves the hire and gives him a vote of confidence.

While Ike retrieves Maria’s ashes from the courthouse, Vera’s dance practice finds her cramping and unable to keep up with the choreography she needs to perform when the show opens in six weeks. Being that this already has her irritated, it’s no surprise that she has a confrontation with Meg, especially since the latter bought Lauren quite a bit of clothes without asking Vera. The Evans family has done what they can to keep Lauren from becoming spoiled or taking what they have for granted, so Vera reasserts her status as Lauren’s mother and sends a message that Meg was out of line. Across town, Danny meets Jack Klein’s daughter Susie before going into his meeting with the state’s attorney, with whom he wants to intern. However, he has to answer questions about where his loyalties lie and how he would respond to illegal activity perpetrated by those he loves; Klein has faith in Danny, considering he’s still in the hunt for the job after Ike was arrested, but he has to prove to his constituents that the boy can be trusted. He then takes Danny over to the Diamond District, a stretch in Miami that is ran by Ben and consists of teenage hookers, a plethora of homicides, and children addicted to heroin, all of which make The Butcher richer. This opens Danny’s eyes to just how much power Ben has and how much pain he brings to the people of Miami. If there were any doubts in his mind about pursuing the internship, they were vanquished by the trip down skid row and up to the Diamond mansion, where Ben is once again watching Stevie and Lily have sex.

After meeting Jack Ruby on the plane, Ike surprises Vera by arriving home and gives her a foot rub that turns into welcome home sex. The following day, Danny heads back to the Diamond District and sees things he had only looked over before. He gets approached by Judi Silver, who doesn’t notice that he’s Stevie’s little brother until she’s right at the car window, and invites her into the car to talk – for the price of $20 upfront and a foot rub. Danny quickly turns the subject to Jimmy Shoes and Ike’s presence in the Everglades that night, which Judi won’t confirm and questions why he wants to know so badly; he then goes to Ike’s office and informs his father that he took the job from Klein, as he believes in both the state’s attorney and the letter of the law. Ike calls Klein a “self-serving hustler” and Danny forcefully tells his father that he believes that people can choose between right and wrong, a not-exactly-veiled criticism of the world in which the Evans family has made their fortune.

If that wasn’t enough for Ike, Ben has sent casino man Eddie Bloomberg (or Eddie Blue) to begin planning the renovations the Miramar needs once the gambling bill passes. According to Eddie, it’ll likely be passing sometime during the summer and they’re trying to have things up and running for a holiday launch. Although he promises to double profits, Eddie is thrown out of the hotel by Ike and Sid later informs his boss that Blue has an impeccable police record that helps him serve as the face that protects his establishments from investigation. With Sloat influencing the vote and a new partner implemented without his permission, Ike’s control over Miami is lessening by the day and could evaporate once the bill has passed. Ben’s plans, though, are to become the first and best casino to open once the bill passes in order to seize hold of the market; Ike’s main concern with the gambling bill is that he doesn’t want to spend a tremendous amount of money for renovations for the bill to not pass.

While Stevie convinces a physically exhausted Vera to try a “vitamin” shot from Dr. Bobby under the guise of it being a Kennedy favorite, Ike gets Theresa to be on the lookout for important names/dates/places when she’s around Sloat and goes to pick up Lauren from Meg’s. When the two adults are alone, Meg brings up the Secret Six, an organization her father helped run that eradicated Miami of its gangster presence through publication of each prominent figure’s crimes in the paper. He suggests bringing the group back to knock Ben and company out of power in Miami and that she should/could use her connections to make it happen.

Ike then heads to the memorial for Maria, where Mercy is introduced to Antonio Rivas, that ends with Vic playing his song with his wife for a final time. Once Ike gets home, he receives a call from Nunez that indicates interest in forming an alliance.

Additional thoughts and observations:
-How gorgeous was Cuba? I’m not sure if the show went to Cuba or if they just found a great stand-in location, but Ike’s brief jaunt to Havana might have been the prettiest thing the show’s done thus far.
-I’m just waiting for the other shoe to drop regarding Lily, Ben, and Stevie. I get that he likes being cuckholded and that he wants Stevie near enough to him so he could either learn information about Ike or bring him over to the dark side, but it feels like there’s a knockout punch of a plot twist/development lurking later this season.
-Was Susie’s presence deliberate? If Danny had been unsure about the position, Klein dangled a pretty girl in front of him to sweeten the arrangement, so to speak.
-Eddie Blue is super handsome and I don’t trust him for a second.
-I wouldn’t think that a cockfight would be the environment most conducive to business talk, but hey, Ben and Ike made it work, I suppose.
-So, Mercy and Rivas were kind of cozy, no? Are we looking at both her and Danny cheating sometime this season?
-The song that Vic played at the funeral is below – “Yo Te Quiero Siempre”. It’s not that version, which came out in 1954, but you get the idea.
–Magic City will be off next week, but when it returns on July 12th, Ike considers a deal with Sy, Danny learns the truth about Ben, and Ben puts a kink in a Cuban arms deal.