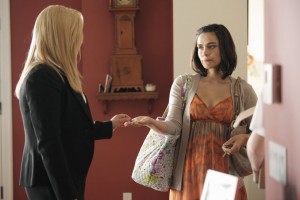 Joss may not think she has any friends, but she seems to have found one in Alex, her lesbian client with the controlling girlfriend. The two managed to connect despite the continued presence of Sally and the underlying tension between them – was Joss not just physically but emotionally attracted to Alex? The realtor has been the sexually adventurous core of Mistresses, unbound by society’s expectations and willing to do just about anything and everything as long as it was on her terms, but aside from a couple of threesomes, she had never even been physical with a woman, let alone built a relationship with one. Would she be willing to change her perspective, though, once Sally becomes a distant memory vs. a current worry?

On the next episode of Mistresses, after the intense fight with Sally last week, Alex has officially broken up with her girlfriend, an awakening facilitated by her time with Joss. Alex never saw her relationship from an outside perspective until she met the realtor and once she realized just how under Sally’s thumb she was, she knew she had to get out – and fast. Another factor in her decision to end things with Sally is that attraction that she shares with Joss; there would never be a chance to explore what’s exactly between them, if anything, should she refuse to stand up for herself and continue living a life that made her feel unfulfilled and empty. With Alex single and seemingly ready to mingle, is now the time for Joss to expand her sexual (and emotional) horizons and see where this could lead?

Elsewhere on Mistresses, Savi’s anxiety about the paternity test results makes her work that much harder to hide her pregnancy from Harry, while April decides to take a risk with Richard and Karen is visited once again by investigator Anthony Newsome.

Is the fact that Savi is telling Harry that she’s pregnant a hint that the baby’s his? Should Joss think about giving a relationship with Alex a chance? How close will Karen let herself get to being found out as Tom’s mistress?