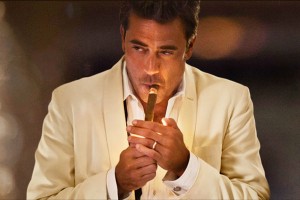 This week on TVHackr, we talked about the newest judge on The Sing-Off, revealed the rules of Under the Dome, and added to the Comic-Con lineup, while the internet reimagined the American Revolution, paid tribute to King of the Hill, and analyzed big demographic hits.

News Roundup: The Rules of Under the Dome
What exactly are the rules of the dome covering Chester’s Mill? CBS has released a list of dos and don’ts for Under the Dome after its massively rated premiere episode.

Mistresses 1.05 Preview: Joss and Alex’s Friendship Takes a Turn
While Joss has to decide whether she wants to take her friendship with Alex to the next level, Savi investigates paternity tests and April has had enough of her riskless life.

Magic City Marathon to Air Friday, July 5th on Starz
Rather than a new episode, Magic City’s first three installments of its second season will be repeated, beginning tonight at 9:00 on Starz.

Family Tree 1.07 Sneak Peeks: Tom May Be Part Native American
Tom is joined in California by Pete and Bea, just as he receives information about his ancestry possibly being Native American. How will their trip to the reservation go?

Defiance 1.11 Preview: The Election Campaign Heats Up
Datak uses Nolan’s past to boost his election chances, while Irisa is plagued by visions that suggest the time to fulfill her destiny as the chosen one has come.

Twisted 1.04 Sneak Peeks: Danny Tries to Be Civil with Archie
Danny’s time on the soccer team doesn’t go quite as he wanted, Jo and Lacey spend quality time together at a sleepover, and Karen gets ambushed at a charity brunch.

The Fosters 1.05 Sneak Peeks: Is Brandon Jealous of Callie Being with Wyatt?
Brandon expresses concerns about Callie being with Wyatt, but are said concerns founded on fact? Or is he letting his desire to be with her cloud his judgment?

Hit the Floor 1.06 Sneak Peeks: Can German Compete with Derek?
German buys Ahsha a $5,000 bracelet to try and keep up with Derek, while the power goes off in the arena for a mysterious reason and Jelena comes face-to-face with Mia in the Devils parking lot.

Dexter: Watch the Final Season Premiere Here
Showtime has released the eighth and final season premiere of Dexter on its Youtube account. How will the final run of episodes kick off for Dexter, Deb, and the whole of Miami Metro?

Devious Maids 1.03 Preview: Olivia Reveals a Major Secret About Taylor
Olivia lets a damaging secret about Taylor’s past slip to Marisol, Carmen takes a meeting with a record producer, and Spence looks to help Rosie out of a jam.

The Killing 3.07 Preview: Suspicion Turns to Pastor Mike
Now that suspicion has turned to Pastor Mike, should Linden and Holder move on from Joe Mills? Or should they still focus on getting him in for questioning while going after Mike?

The Fosters Recap: Don’t Call Me Dude
Brandon and Callie have a conversation that she’s not yet ready for, Jude gets bullied for being different, and Jesus and Lexi encounter a scary situation.

NBC, Showtime Announce Comic-Con Lineups
Among the series coming to Comic-Con are Revolution, Hannibal, Dexter, Community, Grimm, and The Blacklist.

Falling Skies Renewed for Season 4 by TNT
The sci-fi drama, currently in the middle of its third season, will return for a fourth season of 10 episodes, which will premiere next summer.

Twisted 1.05 Sneak Peeks: Will Danny Go to the Fall Festival?
Danny’s possible presence at the fall festival causes a sizeable uproar in Green Grove, while Lacey goes to Gloria looking for information.

The Fosters 1.06 Sneak Peeks: A Dinner Party to Forget for Jesus and Lexi
Lexi’s parents come over for dinner, Callie goes to group therapy, and Wyatt throws a party at his childhood home, which is currently in foreclosure.

Defiance Season Finale Preview: Who Will Be the One to Die?
The time for the election has come and citizens of Defiance will have to make a choice. Will Datak or Amanda win control of the town?

Hit the Floor 1.07 Sneak Peeks: Why Did Olivia Hook Up with Pete?
Olivia and Pete get time alone in a limo and when talk turns to their history with one another, accusations fly. But who is in the right?

Mistresses 1.06 Preview: Is Harry Cheating on Savi?
While Savi suspects that Harry is cheating with his hostess, someone breaks into Karen’s office and Joss is still being given a hard time by Olivier.

10 episodes that made King Of The Hill one of the most human cartoons ever (The A.V. Club)
The A.V. Club analyzes 10 episodes of Mike Judge’s long-running FOX comedy King Of the Hill and argues that it’s humanity is one of the reasons it resonated so much with audiences.

A Deeper Dive Into Television’s ‘Difficult Men’ (NPR)
NPR interviewed Brett Martin, author of Difficult Men: Behind the Scenes of a Creative Revolution from The Sopranos and The Wire to Mad Men and Breaking Bad.

How Social Media Is Being Used To Amplify TV Advertising (Business Insider)
Business Insider looks at what social television is, analyzes its latest trends, and examines its audience makeup.

Archer and Cable TV’s Other Demographic Dominators (Vulture)
While not every cable series can be a Walking Dead in terms of success and reach, Vulture looked at several shows that dominate their targeted demographics and what kind of hurt they put on their broadcast competition.