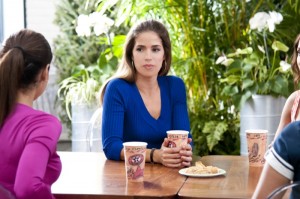 A theme of Devious Maids seems to be that we all have secrets, no matter how big nor how small they may be. Whether it be your best friend, your employee, your spouse, or your worst enemy, everyone is carrying something around that they don’t want another person to know and will stop at anything to conceal from the outside world. It’s a strange part of the human condition, that need to be a different self with different people, but it’s one that has helped define Devious Maids thus far, particularly when it comes to Marisol’s attempts to infiltrate Beverly Hills society to find justice for her incarcerated son. However, while Adrian is on to the fact that she’s not who she says she is, the next episode of Devious Maids finds someone else in the hot seat.

During a run-in at the local supermarket, Michael’s ex-wife Olivia mentions the fact that Taylor used to be a prostitute, something that Marisol wasn’t aware of and something that Taylor would like buried by time and distance from her former life. The amount of truth this accusation holds is questionable, considering Olivia’s actions at Taylor’s birthday party and bitterness about the breakup with Michael, but Taylor’s reaction suggests that her “nemesis” hit close to home and suggests that it might be completely accurate. How will Marisol react to finding out something so personal and private about her employer?

Elsewhere on Devious Maids, Valentina gets Genevieve to aid her in growing closer to Remi, while Adrian helps out a recently divorced friend, Rosie needs Spence to get her out of a bind, and Carmen secures a meeting with a music producer.

Do you think that Olivia’s being truthful in her accusation against Taylor? Will Genevieve be able to help Valentina get together with Remi? How will Carmen’s meeting with the producer go?