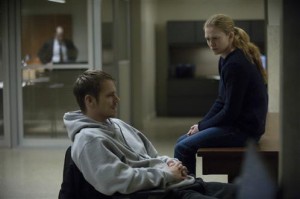 Though Skinner wants them to focus their time, energy, and resources on tracking down the elusive Joe Mills, Holder and Linden are now looking into the possibility that Pastor Mike is the one responsible for the wave of recent murders, as well as the disappearance of Kallie Leeds. On paper, it seems as if they’re making the wrong choice, since Danette found her daughter’s cell phone in Joe’s bag and it was his voice on the tapes made in the motel, but rather than looking strictly at the evidence, they went over what Angie told them and found something that could link Mike to the crimes. All the talk of “saving” Angie led them to look at a possible religious/moral aspect to the murders, which circled them back around to unassuming Pastor Mike, who makes his living giving food and shelter to those without either.

But by dedicating his life to helping the street kids of Seattle, Mike has the perfect set-up to commit acts against those like Ashley, Kallie, and Angie; he has a sterling reputation and tangible proof that he’s doing good for the kids, while he interacts with enough of them to gain their trust and have his pick of the bunch in terms of who he wants to “save”. No one would think to look into the pastor-with-a-heart-of-gold, not when he’s so entrenched in the street kid community and beloved by those within it, but until Joe Mills can be apprehended and questioned, Linden and Holder need to check every possible suspect that could have had something to do with the murders.

Elsewhere on The Killing, Seward battles his own mortality as his hanging draws nearer, while Bullet assumes the role of protector. Has she struck up a friendship with Danette, founded on their loneliness without Kallie, or did the kiss with Lyric bring the two closer together, to the point where Bullet has made it her goal to protect the working girl?

The Killing airs Sundays at 9:00 on AMC.

Do you think that Pastor Mike is the mastermind behind the murders? Is Kallie still alive, wherever she may be? Should Linden and Holder be diverting their attention from Joe Mills at this point, since they haven’t had a chance to bring him in for questioning?