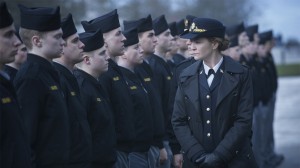 Netflix has released the trailer for the fourth and final season of crime drama The Killing and in it, we see that Linden is still struggling with what happened in the woods with Skinner. An experience like that will change anyone, no matter how emotionally hardened they consider themselves, and Linden will have to deal with the inner turmoil of taking a life while investigating the murder of a family, possibly at the hands of their military student son. Can Linden keep her feelings about her own misdeeds locked up long enough to investigate the case and find justice for the victims? Or will that close a proximity to a grisly murder unnerve her to the point where she wants to confess?

Joining the fourth season of The Killing are Joan Allen (The Crucible) as Margaret O’Neal, the head of the military school Holder and Linden investigate; Sterling Beaumon (Red Widow) as deeply troubled Lincoln, a boy dealing with anger issues; Levi Meaden (Almost Human) as overachiever AJ, a student at the military school; Tyler Ross (V/H/S/2) as Cameron, the black sheep of a well-connected family; and Frances Fisher (Resurrection) as Linden’s mother.

The fourth and final season of The Killing will be released Friday, August 1st on Netflix.

Will you be watching the final season of The Killing? Do you think Linden will be able to keep the secret of Skinner’s death? How will the new case impact the dynamic between Linden and Holder?