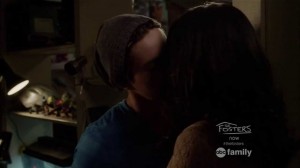 Thus far in their relationship, Jesus and Lexi have spent most of their time ducking and dodging being detected by other people, whether it be the running around behind Mariana’s back or the morning-after situation from last week that her ultra conservative parents still aren’t aware of. It can be exciting, the sneaking around and keeping secrets with someone you’re obviously into, but it can’t last forever, not if they want to make a real go at something serious. Now that they’re backing away from being physical with one another, this may be the right time to see just how strong an emotional connection they have and whether or not a real relationship would be something that stands a chance of succeeding. And what better way of helping that along than a good old-fashioned uncomfortable dinner party?

On the next episode of The Fosters, Lena and Stef have invited Lexi’s parents over for dinner, if only for the latter to see whether their son is being subjected to views that conflict with his non-traditional family. If that wasn’t enough, Stef’s own conservative father Mike also has a seat at the table and that proves to be the tipping point from cordial yet strained family dinner to all-out moral debate, something that brings out a lot of ugly words and hurt feelings among those around the table.  What effect this has on Jesus and Lexi’s relationship remains to be seen; while they like each other and want to see where this goes, their backgrounds may be too different for things to get serious and this dinner party could be the thing that makes them decide to cool it not just on the physical stuff, but on the emotional stuff, too.

Elsewhere on The Fosters, Mike disappoints Brandon yet again, while Callie meets someone from her past at a group therapy session and attends at party at Wyatt’s foreclosed childhood home.

How will Brandon react to being disappointed by his father? What will Callie learn about Wyatt from being in his former home? Is the dinner party going to ultimately be a bad thing for Jesus and Lexi’s relationship?