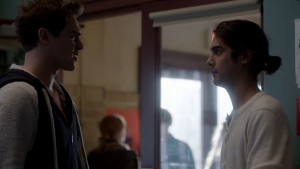 Danny made the unorthodox move of joining the soccer team last week on Twisted. Although the idea behind the decision is sound, in that people at school would see him making the effort to assimilate, it puts Danny in the precarious position of having to deal with Archie on a near-constant basis. He might think that the extra time around Lacey’s boyfriend will allow the Danny Desai Charm Offensive to work its magic, thus securing time with his friend that he’s currently missing, but we’ve seen that Archie is the person at Green Grove most opposed to Danny’s presence at school. Now that the “freak” has invaded his turf, it’s unlikely that he’ll be relenting on his extreme view point anytime in the near future.

On the next episode of Twisted, Danny’s first practice is already filled with tension and the first ball has yet to be kicked. Unfortunately for him, it’s not Archie that’s leading the charge, as the guy next to him refuses to engage and Scott is the one to make the first negative remark, resulting in five laps. For now, Danny might need to focus on keeping his head down and blending in as best as he can, perhaps opting to let his performance on the field do the talking rather than forcing charm on people who don’t want any part of it. If he can help the team win matches and not act as a big distraction to their performance, there’s a chance he could find a home on the team, but until then, he’ll be lucky to avoid a second round to his fight with Archie.

Elsewhere on Twisted, Lacey’s mother Judy invites Jo to a sleepover thrown by her daughter, which Jo will use to gather information on the night of Regina’s party, while Tess convinces Karen to reach out to her old friends, only to be berated by Regina’s mother Gloria about Danny, and Kyle steps up the investigation after finding the photo.

Do you think that Tess deliberately set Karen up for humiliation? What will Danny have to do in order to “prove himself” to Archie? How much information will Jo acquire from being at the sleepover and talking to Lacey for the first time in a while?