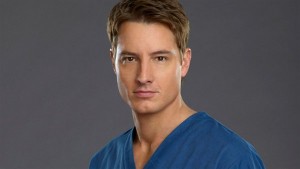 According to , Smallville alum Justin Hartley has signed on for a major multi-episode arc on Revenge. He”s set to play Patrick, the son that Victoria gave up for adoption to go to art school, beginning in the third season premiere. Very little is known about the second Grayson son aside from his origins, as Victoria spent much of the latter part of last season trying to locate him and was forced to use her experience as PR fodder for Conrad”s election campaign. The only exposure we”ve had to him was in the closing moments of the season finale when he unexpectedly showed up at the Graysons door and shocked his mother in the process.

This is the latest in a series of moves that the soap has made in recent months to position itself for a creative and commercial rebound. Interestingly, it”s also the first addition that has been announced, as Ashley Madekwe and Connor Paolo have been confirmed to not be returning as series regulars and showrunner Mike Kelley officially stepped aside at the end of last season. Revenge went from one of buzziest of shows following its successful first season to almost an afterthought in the television landscape, thanks to a tougher timeslot and a creative slump that the show managed to pull out of by the end of the season. Will Hartley”s addition help them hit the ground running in season three?

In addition to his role as Oliver Queen on Smallville, Hartley was a regular on Emily Owens M.D. last season and has appeared on the likes of Castle, Chuck, and Hart of Dixie.

Revenge returns for a third season this fall on ABC. You can check out ABC”s fall 2013 schedule here.

What do you think about the casting? Are you excited to have Justin Hartley back on television next season? Will you be watching Revenge“s next season?