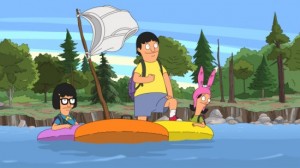 his week on TVHackr, we talked about what’s coming up next on Boardwalk Empire, the renewal of Covert Affairs, and Paget Brewster’s return to Criminal Minds, while the internet touched on hip hop, how to fix fall’s worst new shows, and what hit Netflix this month.

ABC planning on a Modern Family Spin-off
ABC is in talks to build a Modern Family spinoff around Rob Riggle’s character Gil Thorpe, the nemesis of Phil Dunphy. However, nothing has been made official and there are other characters that could head the spinoff.

Hello Ladies Series Premiere Sneak Peeks: Stuart Hits the Los Angeles Dating Scene
On the series premiere of Hello Ladies, British web designer Stuart moves to Los Angeles in an attempt to crack the world of beautiful people and find himself a date.

The White Queen Episode 7 Recap: Stay in Here and Be Dead
While Edward decides to make war on France at the urging of George on The White Queen, Elizabeth is accused of being a witch and Isabel falls mysteriously ill.

Bob’s Burgers Season 4 Premiere Recap: Thundergirl in the Hole
The Belcher family goes on a camping trip and while Bob and Linda get lost after being swept away by the river, the kids learn about survivialism and Tina turns her back on her scout troop.

Alaska: The Last Frontier returns on Discovery
The third season of the Discovery series, which follows the Kilcher family in their battles against the elements, is set to premiere Sunday, October 6th at 9:00.

Boardwalk Empire Season 4: Spoilers for October Episodes
Coming up on Boardwalk Empire, Dr. Narcisse continues trying to turn Dunn against Chalky, while Gillian looks for a way to get Tommy back, Van Alden gets dragged into the middle of the Capone/O’Banion turf war, and Eli is backed into a corner by Agent Knox.

Hello Ladies: Watch the Series Premiere Here
HBO has uploaded the series premiere of Stephan Merchant-fronted comedy Hello Ladies to it Youtube channel, which you can watch here.

Homeland: Watch the Season 3 Premiere Here
Showtime has uploaded the third season premiere of Homeland to its recently launched show-centric Youtube channel, which you can watch here.

Castle Review: “Dreamworld”
On this week’s episode of Castle, Beckett races against time to save Castle, searching for the man who stole the poison in order to get the antidote.

HIMYM 9.03 Review: Last Time in New York
On this week’s episode of How I Met Your Mother, Lily discovers Ted’s list of things he wants to do in New York, while Robin and Barney panic at the impending arrival of their relatives.

ABC Family’s Mystery Girls to host 90210 Reunion?
Jennie Garth is reportedly in talks to join ABC Family comedy pilot Mystery Girls, where she would be reunited with 90210 co-star Tori Spelling.

The Simpsons to Kill Off Regular Character in Season 25
The Simpsons is planning to kill off a regular character, voiced by one of their many Emmy winners, sometime this season. Who will meet their end?

NBC Axes Camp After One Season
NBC has canceled summer drama Camp, which followed the exploits at a family camp and starred Rachel Griffiths, according to star Nikolai Nikolseff.

David Tennant will Reprise Broadchurch Role for US Adaptation
The Doctor Who actor will reprise his Broadchurch role in the upcoming American adaptation, which will be showran by Dan Futterman and Anya Epstein.

Betrayal 1.02 Preview: Sara Recommits Herself to Her Husband
On the next episode of Betrayal, Sara attempts to recommit herself to Drew after finding out who Jack really is, while the murder case begins unfolding.

Witches of East End Promos and Spoilers: Everyone Has Darkness in Them
Lifetime has released new promos for Witches of East End, premiering Sunday, October 6th, in addition to descriptions for the first two episodes.

Motive Renewed for Summer 2014 Return by ABC
ABC has renewed Canadian procedural Motive for a second season, which will premiere sometime next summer.

Wilfred Renewed for Fourth and Final Season
FX has renewed Wilfred for a fourth and final season, which will consist of 10 episodes and air on sister network FXX.

Sleepy Hollow Renewed for Season 2 by FOX
Sleepy Hollow becomes the first new fall show to secure a renewal, as FOX will be bringing the series back for a second 13-episode season in the 2014-2015 season.

Spartacus: The Uncut Saga Schedule Revealed by Starz
Starz has revealed the schedule for their upcoming Spartacus reair, where every episode will be replayed and bonus content will be broadcast for the first time.

Covert Affairs renewed for another Season
USA has renewed Covert Affairs for a fifth season, set to consist of 16 episodes. The second half of season four premieres later this fall.

Community: Nathan Fillion to Guest Star in Season 5
Castle star Nathan Fillion has signed on to guest star on the fifth season of Community. But who will he be playing?

Lucky 7 Cancelled by ABC
ABC has pulled the plug on Lucky 7 after two low-rated episodes and will replace the lotto drama with repeats of Scandal.

The Wire is Jay Z and Lost is Kanye: Phonte has thought a lot about which rappers correspond to which classic television shows (The A.V. Club)
Rapper Phonte has analogized several rappers, including Eminem, 50 Cent, and Kanye West, with classic (and current) television shows, including Oz, Arrested Development, and The Newsroom.

What’s New on Netflix Streaming This Month: October 2013 (Vulture)
Vulture has compiled everything that was added to Netflix this month, should you have the time to watch something else in the middle of the fall season.

Facebook Reveals the New Fall TV Shows Generating the Most Buzz (Variety)
Which new fall television shows are creating the most Facebook buzz? Which are creating the least? Is it necessarily true that the more buzz created, the higher the ratings?

10 Great TV Shows Just Waiting to Be Made (TIME)
While we’re in the middle of rolling out countless new seasons of both returning favorites and promising newcomers, TIME counts down 10 shows that should be made and which networks should be the one to make them.

Why Television Takes Time to Become Great (Den of Geek)
Den of Geek argues that just because a show has a poor first season doesn’t mean it should be cancelled.

Quick  fixes for the fall’s worst new TV Shows – Dad, Betrayal and more (Hitfix)
Hitfix takes a look at the worst new shows this fall and offers solutions that could help them right the way creatively.