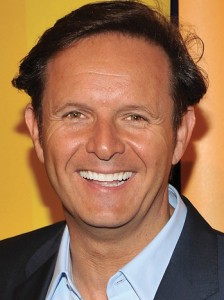 Reality show king Mark Burnett will be bringing his new space reality show to NBC along with Sir Richard Branson, founder of Virgin Group, as recently reported by TVGuide.

The show currently entitled Space Race, features ordinary people competing for a ride on one of  Branson’s first Virgin Galactic suborbital space flights.  The winner could take off on Virgin Galactic’s SpaceShipTwo as early as next year.

“This will be a remarkable experience for anyone who has looked at the night’s sky and dared to dream of space flight,” says Paul Telegdy, president of alternative and late night programming at NBC Entertainment.  The Space Race deal extends Burnett’s recent relationship with NBC, where The Voice is still dominating.  Burnett will also be producing a sequel to The Biblefor the network.

Burnett says that he has been dreaming to produce a space-themed reality show for years, after an earlier project fell through back in 2001.  “Last year I spent time in New Mexico at the state-of-the-art facility and last week spent time in the Mojave Desert with Sir Richard and his impressive team. We got to see the spaceship up close and hear of Sir Richard’s incredible vision of how Virgin Galactic is the future of private space travel. I am thrilled to be part of a series that will give the everyday person a chance to see space and that NBC has come on board so that viewers at home will have a first-class seat.”

Branson has said that he is planning on being on the first Virgin Galactic flight with his family later this year.  A flight is expected to last about two hours, taking passengers up to 62 miles above Earth for the experience.

Celebrities such as Tom Hanks, Angelina Jolie, and Ashton Kutcher are among the 600+ people who have already signed up for a $250,000 seat on a flight.

What do you think?  What would you do to make it to space?