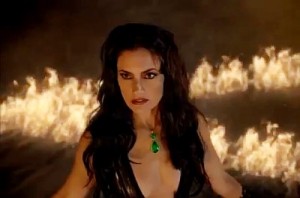 Joanna Beauchamp has kept a major secret from her daughters Ingrid and Freya for decades – they’re descended from a long line of powerful witches. She’s managed to cover her tracks well and keep them from discovering who they are until this point, but when weird things start happening to both of them and Joanna’s sister brings a warning of a lurking threat, she has no chance but to tell them who they are and where they come from. Freya and Ingrid need to have as much time as they can in order to process this life changing information and master their new abilities so they can join together to protect themselves and the rest of their family from whatever seeks to do them harm. But how long will it be before they’re comfortable enough with who (and what) they are to where they can go into battle and look after themselves accordingly?

Listed below are the dates, titles, and descriptions of the first two episodes of Witches of East End.

Sunday, October 6th – “Pilot”
Two young women learn from their mother that they all are actually powerful, immortal witches. In the opener, an ancient enemy threatens to destroy the Beauchamp family, and sisters Freya and Ingrid become the clan’s only hope of survival.

Sunday, October 13th – “Millicent Fenwick, R.I.P.”
Ingrid discovers dangerous family heirlooms that she uses to resurrect her aunt Wendy. Together, they race to save Freya from Doug, her jilted ex-boyfriend from another lifetime. Meanwhile, Joanna is questioned by the police about her murder charge; and Dash and Killian have a tense reunion.

The series premiere of Witches of East End is set to air Sunday, October 6th at 10:00 on Lifetime. You can check out additional previews for the series here.

Will you be watching Witches of East End? How do you think the television adaptation will compare to its novelistic origins? Is there a chance for the show to break through the outrageous Sunday television traffic jam and become Lifetime’s second new hit of the year?