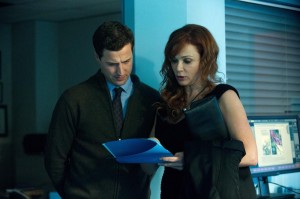 According to The Hollywood Reporter, ABC has renewed Canadian procedural Motive for a second season, which is set to premiere sometime next summer. The series, which has been a big hit in Canada since its post-Super Bowl series premiere, recently resumed production in Vancouver and should return for its second season (in Canada) in early 2014.

Motive is the second scripted summer renewal that ABC has given out in recent days, as Mistresses earned itself a second season late last month. Fellow Canadian cop drama Rookie Blue, having already spent four seasons on ABC, was gifted with a fifth season earlier this summer. On the reality side of the network’s summer schedule, Extreme Makeover: Weight Loss Edition, The Bachelorette, and Celebrity Wife Swap will be back for future seasons, while murder-mystery competition Whodunnit? and newsmagazine The Lookout have yet to learn word of their fate.

Averaging a 1.2 in the 18-49 demographic this summer, Motive stars Kristin Lehman (The Killing) as Detective Angie Flynn, a single mother in charge of investigating the motives of killers in her city with her partner Oscar Vega (Louis Ferriera). Each episode begins with the revelation of who the killer and victim are, with the events leading up to the crime, including the reason the killer committed the murder, being told through flashbacks placed throughout the episode.

Are you excited that Motive will be airing in the United States for a second season? Do you think the series can have as long of a run in the States as Rookie Blue? Which summer series currently in limbo are you most anxious to learn the fate of?