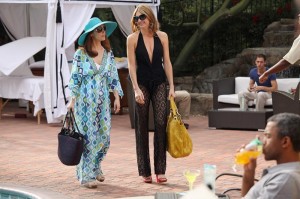 It looks like Mistresses hasn’t flatlined quite yet, as ABC has given the summer soap a second season renewal. Ranking as the summer’s No. 2 scripted network drama among adults 18-49 behind Under the Dome, the series became summer’s top indexing broadcast drama with 48% higher numbers with Adults 18-49 in homes earning $150k+ and saw its ratings jump 58% when DVR playback was factored in. Additionally, Mistresses is very much on-brand for ABC, an inexpensive way for the network to remain competitive in the summer and please the creative community.

A renewal wasn’t always certain for the series, though, which got off to a decent start and saw what potential it had to gain an audience snuffed out by Under the Dome, which became a bigger hit than even the most fervently loyal of CBS executives could have imagined. ABC did a wise thing by moving the series away from the sci-fi giant for the final three episodes of the season and saw ratings increase as a result, hinting at what the show could bring the network with more advantageous scheduling.

Reportedly, ABC had until September 30th to make a decision about the show’s fate after extending the contracts for core cast members earlier this summer. With Lucky 7 being DOA and Mistresses developing a fan base throughout its season, even with the formidable competition and a mediocrely rated season of The Bachelorette as a lead-in, they made the choice to latch on to the summer soap and hope that it can develop into a key piece for their summer 2014 lineup. There’s always the possibility, though, that the series will be plugged into the schedule sometime during the regular season as a late spring replacement, should additional ABC dramas begin failing.

You can check out a recap of the Mistresses first season finale here.

Are you happy about the Mistresses renewal? What do you expect to happen when the show resumes (presumably) next summer? How do you think the show should be scheduled from here on out?