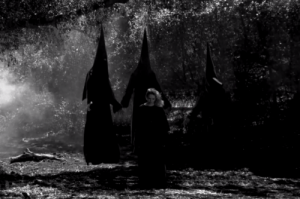 American Horror Story: Coven doesn’t premiere for another couple of weeks, but the newly revamped opening credits have already been released. Whereas the credits for season one explored the infamous Murder House and season two featured a menagerie of horrors to be found in the Asylum, the third season of the FX miniseries finds its opening credits with most of the color drained and the location shifting from indoors to outside, as a chunk of the minute-long clip takes place in the woods. Among the visual clues for the season are the mysterious hooded figures, the multiple inclusions of a ram (both the image of the animal itself and the horns on another ominous presence), and the voodoo paraphernalia, including dolls, pins, and cards.

After focusing on ghosts and a mental institution for its first two seasons, American Horror Story will be heavy on witches and witchcraft for its third season, as Coven will tell the story of the last remaining witches in America. Forced underground following the Salem Witch Trials, they’ve remained there with the intent of being as secretive about their lifestyle as they can, lest incidents like the one in Massachusetts become normalcy and drive their people into extinction. However, a string of mysterious attacks forces the witches to go on the defensive and pool a crew of their young into a New Orleans academy with the intention of teaching them how to defend themselves and how to control their powers. With the Supreme making the trek to the Big Easy, will they manage to control the threat against them and emerge stronger and smarter as a result?

The third season of American Horror Story is set to premiere Wednesday, October 9th at 10:00 on FX. You can check out every teaser released thus far here, as well as key art of the series here and here.

Will you be watching American Horror Story this season? What do you think of Coven‘s opening credit sequence? Are you going into the season with any expectations?