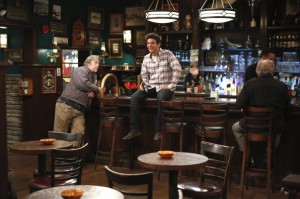 Really,  How I Met Your Mother‘s second episode this season just further reminded me that at some point we’re going to have to say goodbye to the show.

The core of the episode revolved around Lily’s discovery of what was essentially Ted’s bucket list of things to do in New York before he leaves.  The list includes things such as having a drink with his favorite students, buying the whole bar a round of drinks, and saying goodbye to the Empire State building – or “Empie” as Ted has so lovingly nicknamed the structure.

He and Lily spend the episode discussing the list, flashing back to his last swordfight with Marshall that ended in Lily’s ruined dress, and Robin and Lily’s (which smashed a bottle of scotch).  One of the more important things on the list however, is Ted’s apparent wish to have “one last” scotch with Barney.  Because, you see, he’s been avoiding his bro and it takes Lily almost the whole episode to get him to admit it.  As it turns out, Ted doesn’t want to have to admit what happened with Robin and the locket at the carousel.

Speaking of the locket, don’t forget we’re awaiting the story of Ted’s trip to LA to see Stella and get it back.

Unfortunately for Ted, just as he’s about to toast a glass with Barney, Barney turns and reveals that he saw Ted and Robin at the carousel – fade to black.  Obviously (hopefully), there will be a continuation from this point next week.  The title of next week’s episode is “The Broken Code,” so make of that what you will.

Lily also takes note of the contents of the list – that it’s full of all the good things about New York – and gives him “one last” life lecture (also on his bucket list) about how he should be saying goodbye to the bad things rather (cue montage of all of Ted’s down-moments), because the good things will always be waiting for him.  “You’re dreaming if you think it’s the last one of those.”

Elsewhere in the episode, Barney and Robin avoid their elderly relatives in fear that once they get married the spark will die.  Understanding their plight, James sacrifices himself to the relatives so that Barney and Robin can have sex in the ice room, though they later stumble in on Robin’s great-grandparents going at it, and realize that that will be them in the future, still just as passionate.

Overall I enjoyed the episode, because, well, how can I not?  However, if the recap is any indication, the episode did feel very disjointed.  I don’t think it took away from the episode in anyway, as HIMYM often tells stories out-of-order, but in getting ready to write a review I had a hard time figuring out where to start and what to say.

Honestly, knowing that the entire season is to take place during the one weekend, I’m worried that I’m going to get sick of the Ted-still-pining-for-Robin bit.  I can only hope that the looming conversation with Barney will put somewhat of an end to it.

Clearly, the season will be spent discussing the more personal issues, emotional for the characters, rather than just telling funny stories, which feels to me a good way to give everyone a fitting sendoff, especially after the flash-forward last week of Ted actually being happy with the mother.  If they can continue with episodes like last night’s, which did a decent job of balancing the comedy with the touching reasons why these characters act the way they do, the season will be great.

Other highlights from “Last Time In New York”: Lily having Daphne force Marshall into Green Bay Packers gear, the return of Linus, and the use of chocolate syrup, katchup, and hand sanitizer with cheap booze as a substitute for Ted’s scotch.  Basically it was a really good episode for Lily.

What did you think of last night’s HIMYM?  Let us know in the comments below!