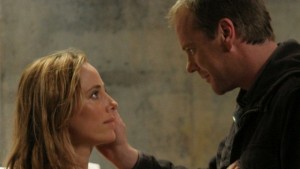 Kim Raver has officially closed a deal to return to the Fox event series as Kiefer Sutherland’s former onscreen love, Audrey.  But she’s not the only one.

According to TVLine, William Devane, who originally played her character’s father James Heller, has also made a deal to appear in the series.

Raver joined 24 in its fourth season, and stuck around through season 6.  When we last saw her, Audrey was left in a relative vegetative state after being tortured and drugged by Chinese captors – something that led to her father to keep Jack from seeing her again.

Raver and Devane are the third and fourth veterans to return to the revival following Sutherland himself and Mary Lynn Rajskub.

24: Live Another Day, is currently slated to air in the spring as 24 “compressed over 12 weeks.”  The series will progress chronologically, but will skip hours.

It was announced yesterday that the series will be filming in London.