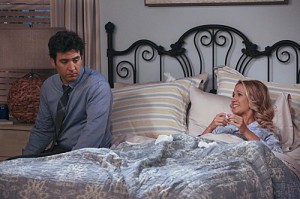 This week on TVHackr, we talked about an important How I Met Your Mother milestone, what to expect on FX come January, and a new Netflix deal with Disney, while the internet touched on sexy newscasters, Facebook TV reminders, and ratings winners and losers.

Bob’s Burgers Recap: Breadsticks and Butt Punches
When Linda feels that her date night with Bob has gone stale, she decides to take flying lessons, only to find out that her teacher has other things in mind.

Witches of East End 1.05 “Electric Avenue” Recap
While Ingrid finds her own way of grieving the loss of Adam, Freya is forced to deal with Dash’s ex and Wendy’s spell has adverse effects on Maura.

Community: Vince Gilligan to Guest
Breaking Bad creator Vince Gilligan is set to appear on an upcoming episode of Community, which returns this January on NBC.

Castle Review: “Like Father, Like Daughter”
When Alexis enlists Castle’s help on a case she’s working with her professor, he and Beckett uncover evidence that local police had previously overlooked.

How I Met Your Mother 9.08 Review – The Lighthouse
While Barney gets caught in the middle of a conflict between Robin and Loretta, Ted and Cassie try to enjoy a trip to a lighthouse.

Treme Season 4 Spoilers and Trailer: Thirty-Eight Months After the Storm
HBO has released a trailer for the final season of Treme, as well as episode descriptions for the final five installments of the David Simon drama.

Scandal Casts Olivia’s Mom: Khandi Alexander to Play the Part
Treme alum Khandi Alexander has been cast as the mother of Olivia Pope on Scandal. She made her first appearance this past Thursday.

Witches of East End 1.06 Preview: Ingrid Flashes Back to a Past Life
On the next episode of Witches of East End, Freya makes a shocking discovery at Fair Haven and Ingrid flashes back to one of her past lives.

Netflix Partners with Disney for Live-Action Marvel Series
There will be four new Marvel series coming to Netflix in the near future thanks to a deal the streaming service struck with Disney this week.

Boardwalk Empire Season 4: Spoilers for November Episodes
Coming up on Boardwalk Empire, Chalky and Daughter go on the run after a close call, while Nucky gets an important tip from Sally and Richard goes looking for Tommy.

Betrayal 1.07 Preview: Sara and Jack Deal with Their Affair Being Exposed
On the next episode of Betrayal, Sara and Jack must deal with having their affair exposed, while Zarek takes it upon himself to take care of Brandy for Karsten.

Reign 1.04 Sneak Peek: Mary and Her Ladies Prepare for a Costume Ball
This week on Reign, Mary and her ladies prepared for a costume banquet that was to culminate in an execution of an English envoy accused of spying.

Why People in Hong Kong Protest Over Bad Television (The Atlantic)
100,000 Hong Kongers took to the streets to protest the paucity of television channels made available to them, a number low enough to negatively impact the quality of shows they do get to see.

Evicted Greek TV channel goes on air from street (RT)
Despite the government shutting Greece’s former state broadcaster down, the network turned a street into its live audience, at least for a brief time.

12 TV Shows That Are Way Up—or Way Down—in the Ratings (E!Online)
Do you want to know the biggest winners and losers of the fall season? E!Online looks at shows that are either soaring in the ratings or still crashing down to Earth.

The 50 Sexiest in TV News (Mediaite)
Here, look at the pretty people charged with bringing us our news.

Facebook Adds Reminders For Upcoming TV Show Airings To Its Android App (Tech Crunch)
Ever forget to watch your favorite show? Well, you’re in luck, as Facebook has added TV reminders to its Android app.