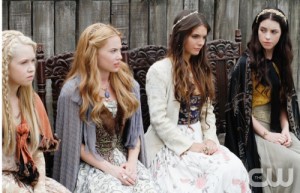 Though Mary may still have feelings for Francis, she knows that she won’t be able to stay in France, not when she’s being blamed for Bash’s injuries and not when it’s been made clear that Scotland will never have France’s military support. She’s felt unwelcome from the moment she arrived in France and through accepting Tomas’ proposal, she’ll be able to find a country that will accept her, in addition to the aid her betrothed has already promised her county. However, Mary’s decision to eschew France for Portugal will not just impact herself; Greer, Aylee, Lola, and Kenna will all have to adjust to the sudden move, something that was also required of them when they were plucked from Scotland and sent to serve their friend as she tried to score proper support against the England.

On tonight’s episode of Reign, the ladies are preparing for a costume ball that will serve as their final event in France before the big journey to Portugal. While Mary has talked herself into being excited at the new opportunity, likely due to the comfort that Tomas promises to provide and the feeling that this is someone she should be with, the others aren’t as happy with the new arrangement, as they’re forced to leave behind the lives that they were just starting to carve out around the castle. Kenna, especially, isn’t fond of the idea of leaving the country without getting one last chance to be with Henry, but Mary’s priorities lie with her family and her country, especially since Kenna has yet to inform any of her friends of her affair. As such, the costume ball tonight is of the utmost importance, because if Kenna isn’t going to come clean to the girls about her reason for wanting to stay in France, she’s going to have to make the ball count, since it will be her last chance to leave a good impression on Henry.

Elsewhere on Reign, Mary has to decide if she’s willing to sentence a man to death to get out of her engagement to Francis, while Francis and Bash confront Tomas about their suspicions regarding his intentions.

Do you think Tomas misled Mary to get her to accept his proposal? Are Francis and Bash suspicious because of anything concrete or are they merely looking for a way to keep Mary in France? Will the costume ball be the appropriate send-off for Mary and her ladies?