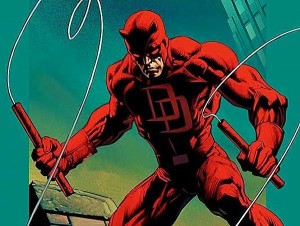 In addition to Marvel’s endeavor with Agents of S.H.I.E.L.D., four more of the franchise’s characters – Daredevil, Jessica Jones, Iron Fist, and Luke Cage – will be getting their screentime.

Disney and Netflix announced today that they have joined forces to develop a live-action “four series epic,” featuring the afrorementioned heros, plus a “miniseries event.”  Each hero will star in their own thirteen-episode series on the streaming platform, and their storylines will converge in the miniseries finale, currently titled The Defenders, said to “reimagine a dream team of self-sacrificing, heroic characters.”

A similar technique used in The Avengers which draws storylines from five previous films and several Marvel heroes’ stories.

The epic will begin in 2015 with the first serial, spotlighting Daredevil, blind New York City crusader last seen onscreen in a less-than-thrilling 2003 film, played by Ben Affleck.  Daredevil will be followed by series about Jessica Jones, Iron Fist, and Luke Cage.

The announcement is the latest news after Netflix inked a deal with Disney for subscription TV rights to all live-action and animated films beginning in 2016.  Marvel’s Agents of S.H.I.E.L.D. can currently be seen on ABC on Tuesdays at 8PM.