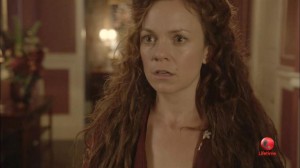 While Ingrid has been the most apprehensive of the Beauchamp family to embrace who they are, her conservative nature trying desperately to hang on to any sense of normalcy that she can find, she’s slowly come around to the idea of using her powers and having both Wendy and Joanna guide her through discovering what she can do. Be it the loss of Adam, the threat of the shifter, or a sense of duty to her family, Ingrid, who has been acknowledged as the Beauchamp with the most potential to grow her magic, knows that this next phase of her life won’t look or feel like anything she’s known during this existence. But what if she could feel like what life was like during one of her past lives, a time when she was more comfortable in using magic?

On the next episode of Witches of East End, Ingrid flashes back to one of her former existences thanks to a photo from Penelope that was found at Fair Haven. This specific Ingrid was already hinted at when Wendy discovered that Freya was wearing the wedding dress that her sister died in, but Ingrid has yet to see what exactly her life was like all those years ago. She’s heard from Wendy about how powerful she was and the type of witch that she could be if given proper training; for now, though, it’s all hypotheticals and what ifs, nothing tangible or concrete for her to wrap her mind around. For a thinker like Ingrid, not having something to grasp onto in a situation makes it extremely difficult for her to adapt, so finding herself shoved back in time and seeing the type of person she was (and can become again) could be the thing that wipes the last bit of doubt about embracing who she is from her mind.

Elsewhere on Witches of East End, Freya makes a startling discovery while at Fair Haven.

Witches of East End airs Sundays at 10:00. You can check out a recap of the most recent episode here.

What do you think Ingrid will learn during her flashbacks? Will they in any way help her family with their battle against the shifter? Is Freya’s discovery going to change her relationship with Dash for good?