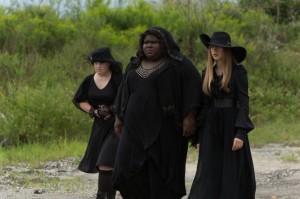 What wasn’t revealed in the renewal announcement, though, was the creative direction of the fourth season, as American Horror Story reinvents itself every season in terms of story, setting, and character while keeping its cast mostly the same. Creator Ryan Murphy has indicated that the focus of the next season could be revealed in one of the final episodes of Coven, possibly in a similar way to how Asylum and Coven were revealed in their prior seasons, respectively. In response to lower ratings for Asylum, the auspices behind American Horror Story decided to make Coven lighter and more comedic in tone, but since the show tries to look and feel completely different from one season to the next, there’s a strong likelihood that we see American Horror Story edge back toward the darkness it thought it escaped.

American Horror Story: Coven airs Wednesdays at 10:00 on FX. You can check out a preview of tonight’s episode, where Zoe discovers a new power and Fiona clashes with Myrtle over control of the coven, below.

What have you thought of American Horror Story: Coven thus far? How should the miniseries reinvent itself for a fourth season? Who would you like to see join the cast next season?