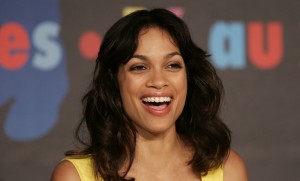 Netflix has announced the newest addition to the cast of Daredevil – Rosario Dawson.

Dawson (Kids, Sin City) will be joining the streaming series as a dedicated young woman whose quest to heal Hell’s Kitchen brings Matt Murdock, a.k.a. Daredevil, into her life, while her own journey alters the course of his battle against the injustices of the city, according to Marvel.

“Rosario Dawson is one the most charismatic, talented and powerful actresses in Hollywood, so she was always at the top of our list for ‘Marvel’s Daredevil,”’ said Marvel head of TV Jeph Loeb.  “Her role in the series is absolutely critical to Matt Murdock’s journey to become the hero we know as Daredevil.”

The 13-episode series is the first of four Marvel original series slated to stream on Netflix.