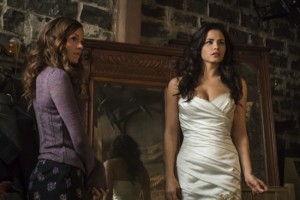 Lifetime will be running a full-season marathon of Witches of East End on Sunday, December 15th that leads up to the season finale. The series, which stars the likes of Julia Ormond, Rachel Boston, and Madchen Amick, tells the story of a family of witches battling a threat against their name and has already been renewed for a second season.

Listed below are the times, titles, and descriptions of the episodes in the Witches of East End marathon, as well as links to the corresponding previews and recaps.

1:00 p.m. – “Pilot”
Two young women learn from their mother that they all are actually powerful, immortal witches. In the opener, an ancient enemy threatens to destroy the Beauchamp family, and sisters Freya and Ingrid become the clan’s only hope of survival.

2:00 p.m. – “Marilyn Fenwick, R.I.P.” (Preview, Recap)
Ingrid discovers dangerous family heirlooms that she uses to resurrect her aunt Wendy. Together, they race to save Freya from Doug, her jilted ex-boyfriend from another lifetime. Meanwhile, Joanna is questioned by the police about her murder charge; and Dash and Killian have a tense reunion.

3:00 p.m. – Today I Am a Witch” (Preview, Recap)
Ingrid struggles with the consequences of the resurrection spell; Joanna tries to figure out which of her former enemies might be responsible for framing her; Wendy teaches Ingrid and Freya how to use their powers; Freya gets a new coworker at the bar.

4:00 p.m. – “A Few Good Tailsmen” (Preview, Recap)
Joanna’s immortal attorney prepares for her murder trial; Ingrid rethinks her relationship with Adam; Penelope recruits Freya to help her mend the rift between Dash and Killian; Wendy seduces an entomologist while trying to gather ingredients for a spell; Joanna and Harrison try to protect Redmond from the shifter.

5:00 p.m. – “Electric Avenue” (Preview, Recap)
Ingrid finds a unique way to mourn for Adam; Joanna and Harrison take their friendship to the next level; Freya meets Dash’s former fiancée when she returns to deal with some unfinished business.

6:00 p.m. – “Potentia Noctis” (Preview, Recap)
Freya makes a startling discovery at Fair Haven; Ingrid has flashbacks to one of her past lives.

7:00 p.m. – “Unburied” (Preview, Recap)
The shifter summons a familiar face; Ingrid discovers something startling from her past; a novelist comes to East End to research his new book; Wendy tries to get serious with Leo; Joanna reads Freya’s tarot cards.

8:00 p.m. – “Snake Eyes” (Preview, Recap)
Wendy and Joanna fight over a secret that Joanna has kept for more than a hundred years; the shifter threatens Freya; Ingrid suspects that Mike has ulterior motives.

9:00 p.m. – “A Parching Imbued” (Preview, Recap)
A mysterious professor with old connections to the Beauchamps tries to help Freya regain her powers. Meanwhile, Killian makes a decision about his future in East End; Mike reveals an interesting theory to Ingrid; and Dash tries to solve the mystery of the catacombs.

The season finale of Witches of East End airs Sunday, December 15th at 10:00 on Lifetime. You can check out a preview of the episode here.