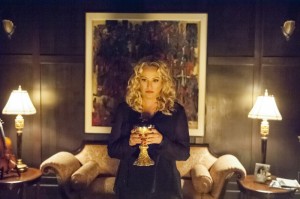 Ingrid joins Freya at the Bent Elbow and hears about what Joanna said during the tarot reading and how Dash isn’t returning her sister’s calls right now. While Penelope spells a bouquet of flowers with the intention of sending them to Freya, Joanna confesses to Wendy that she still has the snake, something that cost the latter one of her lives. Wendy is understandably upset at the discovery, jumping back when Joanna opens the box, and admonishes her sister for keeping something so poisonous and corrupting, especially if she plans to use it someday to open the portal. However, Joanna reiterates that she doesn’t plan on getting rid of it anytime soon.

Barb gets Ingrid to assist Mike in looking for books on the history of East End, as he’s writing a work of historical nonfiction that takes place at the turn of the 20th century in the town. Meanwhile, Freya deliberately tries to keep her conversations with Killian work related, accusing him of destroying her life, and Wendy gets anxious about the snake still being in the house; she wants to burn it, since it killed everything good about their father, but Joanna refuses, likely because it’s the one thing that could help her open the portal and reunite with her son Frederick. When Joanna leaves the room, Wendy overhears the box calling to her and opens it, locking eyes with the snake before it attaches itself to her arm.

It doesn’t take long for the venom from the snake to make its way to her brain and instead of searching for a spell to release Wendy from the key’s grasp, Joanna is dealing with a more aggressive Wendy, whose main goal (fueled by the snake) is to open the portal and return home with her sister. However, that’s not possible, not when their father banished them and threatened to kill them should they ever return to their land again; Joanna explains to Wendy that there’s no way that he’s changed his stance on their presence and that even if they did open the portal, there’s no telling what dangers could come through. She then uses a spell to keep Wendy locked in the house and away from the portal, activating another spell that finds arms shooting from the walls and the clothes hanging on the closet door and grabbing Wendy tightly. Wendy taunts her sister about how Frederick was left behind, all she does is destroy, and the girls are scheduled to die soon before freeing herself and escaping to another part of the house.

Amy breaks up with Killian after walking in on a decidedly personal conversation between him and Freya, though he explains to Freya that he broke up with Amy due to her wanting something more serious than he’s willing to give her. As she prepares to lecture him over his latest blunder, Freya gets a delivery – the white flowers that Penelope spelled, which she assumes were from Dash despite there being no signed card. When she goes to sniff the flower, though, something pricks her and causes her to become woozy. Penelope arrives to pick Killian up for a lunch date and ends up offering to take Freya back to Fair Haven and nurse her back to health. Back at the library, Mike learns of Ingrid’s interest in witchcraft when he asks for books specifically tailored to the occult, as the town has a long history of supernatural occurrences. She counters that her dissertation wasn’t anything special yet ends up keeping the library open late that night so Mike can continue his research. He’s a fast note taker as is and it turns out he’s also a published author, though when he asks Ingrid, the only other person in the library at the time, about reading her dissertation, she brushes it aside. She never finished it and besides that, she doesn’t believe in witchcraft, claiming to be a rational skeptic. Mike, though, believes that witches are real, citing convincing 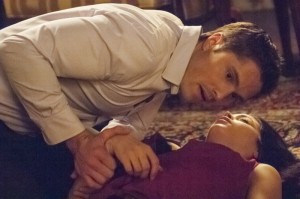 evidence that he’s seen as proof; Ingrid, though, claims that evidence can be altered.

Wendy cuts the lights in the Beauchamp home long enough to leave Joanna vulnerable, choosing the right moment to attack her sister in the dining room. However, Joanna gets the lights back on and frees herself from Wendy’s grasp, only Wendy is still taunting her – this time, about Joanna’s husband leaving her, the girls not knowing that he lives nearby, and how it’s her fault that the girls are cursed in the first play. Joanna sends Wendy flying across the room at the last comment, just as Ingrid learns how Mike’s interest in the occult came from his archaeologist father, who drove himself insane with his obsession with finding Asgard, the land the witches in East End allegedly came from. He claims that the door to Asgard is in East End and that everything he’s seen points in that direction; Mike then pulls out a map purported to be to Asgard that his father found in Peru. Unfortunately, it’s too faded to be read.

Once at Fair Haven, Freya drinks tea that was mixed by Penelope and quickly becomes unconscious, giving the shifter opportunity to place candles around her body. She puts spelled wine on Freya’s lips and seemingly ingests her powers, with Dash arriving just after and finding his mother panicking about not being able to feel Freya’s pulse. While Wendy tests Joanna’s reflexes by sending a hoard of knives flying at her, only for Joanna to spell a pair of scissors when her sister leaves, Ingrid spells the Asgard map and gets a quick view before having to return it to normal when Mike comes back. She rushes him out of the library, just as Dash gives Freya a shot of epinephrine and Wendy pins Joanna to the wall using a trunk. Dash explains that he made it to London but couldn’t go to the conference knowing that things weren’t settled with Freya; he intended to come back to town to tell her that he couldn’t marry her after what she did, but when he saw her on the floor, he realized that he didn’t want to live in a world without her. The two make up, while Wendy hops on the trunk and mentions how she would sacrifice Joanna at the portal. Joanna manages to make a door fly open long enough to distract Wendy and she stabs her sister’s hand long enough to use the scissors to cut the snake off, thereby destroying it and their chances of opening the portal ever again.

That evening, as Joanna takes a moment to herself and Wendy sheds tears following their ordeal, Freya discovers that her powers don’t work anymore when she tries to start a fire in the fireplace. Wendy and Joanna apologize to each other for what they said and for keeping the snake longer than they should, respectively, and mourn the fact that neither of them will see Frederick again. Ingrid comes in asking about Asgard and mentioning the writer that she had been helping, causing Joanna to warn her to keep her distance from him, and Freya arrives soon after, in shock at not having her powers anymore.

Additional thoughts and observations:
–Season 2!
-We’re all in agreement that Mike is Frederick, yes? Last week I spit-balled that he would be a witch hunter, but the revelations that there’s a Beauchamp brother lurking out there and that Joanna’s ex-husband lived nearby were too conveniently placed in an episode that shone a light on Mike’s journey for answers about himself. Plus, the time he spent with Ingrid in the library never turned that romantic, so there might be a sixth sense of sorts keeping them from going to that level with one another.
-I get distinctly Buffy-esque vibes from all talk about the portal and how they don’t know what could show up if it opens. And I like it.
-Very fun plot with Wendy and Joanna. At first, it seemed really silly (even for this show), but it let Madchen Amick explore another aspect of the character, exposited a lot of valuable information that will come into play during the final two episodes of the season, and brought a sense of action that the show doesn’t always tap into. Wendy becoming physically more animalistic while being under the snake’s influence (e.g. hopping on the trunk) was also a nice touch.
-If Virginia Madsen had a mustache, she would have twirled it during that last (deliciously over the top) shot of her controlling the weather and thanking Freya. I twirled my own mustache, though, since the moment obviously called for it.
-Even though the show version of Witches of East End is different than the book version, it looks like they’re using one of the twists from the latter in the former.
-Where’s Harrison in all this?
-Next week on Witches of East End: A mysterious professor attempts to get Freya’s powers back, while Killian makes a decision about his future in East End, Dash tries to solve the mystery of the catacombs, and Mike shares a theory with Ingrid.