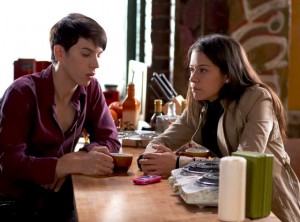 BBC America has revealed that the second season of acclaimed sci-fi thriller Orphan Black is set to premiere Saturday, April 19th, 2014 (a palindromic premiere date, which is quite fitting) at 9:00. Though the show wasn’t exactly a ratings powerhouse during its initial run last spring, it’s picked up an avalanche of word of mouth for its quick, intelligent plotting and the performance of Tatiana Maslany, who plays each of the clones on the series.

Orphan Black centers on Sarah Manning (Maslany), a small-time con woman who witnesses the murder of Elizabeth “Beth” Childs (Maslany) at a train station. While this is horrifying enough, Sarah discovers that Beth looks exactly like her and gradually comes to learn that there are more out there like her, including soccer mom Alison Hendrix (Maslany), graduate student Cosima Neihaus (Maslany), and religious zealot Helena (Maslany). Together, Sarah, Alison, and Cosima attempt to put the puzzle pieces of their existence together to figure out why they are who they are, who was originally behind the cloning, and what purpose they serve in the grand scheme of things. However, there are forces who don’t want them to become cognizant of their unique situation, forces who will do anything they can to stop the progress the clones make.

You can check out two teasers for the upcoming season of Orphan Black below.

Will you be watching Orphan Black next season? Where do you think the show goes following the events of the first season finale? How many more clones would you like to see introduced over the course of the second season?