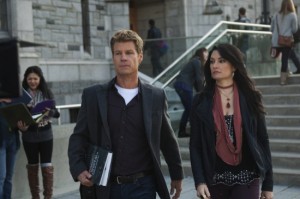 Throughout the first season of Witches of East End, Wendy and Joanna have been at a loss as to the identity of the shifter, since the latter has had too many enemies for them to narrow down the list of suspects. As such, Penelope has gotten in several attacks on the Beauchamp family fairly unimpeded; she may have suffered some damage as Joanna, Wendy, Ingrid, and Freya fought her off, but the fact that she’s gotten so close to them without them knowing who she is has to unnerve them, even a little bit. With all the pent-up frustration and rage toward the shifter, mostly due to Joanna’s anxiety over losing her girls once again, what will happen when the two discover the true identity of the shifter?

On the season finale of Witches of East End, Joanna and Wendy do just that, leading to a showdown between themselves and Penelope. Unfortunately, that discovery happens on Freya’s wedding day right as she’s faced with making a decision about whether to marry Dash or run away to Costa Rica with Killian, a decision made all the more difficult by him coming by her house and warning her that marrying Dash will destroy her. Joanna and Wendy may be able to save their family by defeating Penelope once and for all, thereby exorcising the ghosts that linger from the day Archibald was killed, but if Freya decides to leave without telling them, the Beauchamps will still be splintered.

Elsewhere on Witches of East End, Ingrid finds out even more worrying information about Mike, who takes dangerous steps to complete his plan of finding the door to Asgard.

The season finale of Witches of East End is set to air Sunday, December 15th at 10:00 on Lifetime. The show has already been renewed for a second season.  You can check out a recap of the most recent episode here.

Will this be the episode where Freya makes her choice between Dash and Killian? How will Joanna and Wendy react to finding out the identity of the shifter? Is Ingrid going to go along with Mike’s plan to use her to get to Asgard?