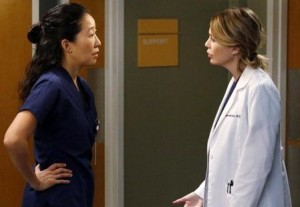 Somebody That I used to know is the 10th episode of Grey’s Anatomy Season 10, which is also the name of a very popular song by Gotye, a Belgian Singer and Songwriter, featuring Kimbra. After Callie’s hearing, things are indeed getting normal at the Grey Sloan Memorial as doctors are back from the court and back to their normal rounds, surgeries and attending patients. Ben finally breaks his silence about Bailey’s strange behaviors off lately and discusses with Shepherd that Miranda is highly likely to be suffering from a kind of an Obsessive Compulsive Disorder (OCD). Now in this kind of condition, both Owen and Shepherd are highly dubious whether or not they can trust Bailey with surgeries as her mental and physical capacity is not quite normal to conduct any kind of surgical procedure.

Further, Chief Hunt hands over Miranda’s surgeries to Meredith, just for the time Bailey gets better. Calzona fans must be happy now that the couple is back together and Arizona declares that she was seeing someone, while they were on a break. However, Callie doesn’t ask who it was; it somehow gets revealed during a surgery, where everyone, i.e. Callie, Arizona and Leah was working. Callie finds out that that someone was no one else but Leah. On the other hand, Jackson is taken aback on learning that April is not inviting him to her wedding because her fiancé, Matthew is not comfortable with him being there, but April tells him that he’d rather come as Stephanie’s date. Now that’s a way one wants to get invited to a wedding.

Along with taking over Miranda’s surgeries, Dr. Meredith is also doing her best to get Webber out of the hospital walls. As all this wasn’t enough on her plate, the Shepherds have planned the Thanksgiving dinner at their place and to everybody’s relief, Owen’s girlfriend Emma will cook. Richard is also desperate to get back on his feet and in spite of Jo’s warnings; he works too hard on the treadmill and falls down resulting into broken ribs. All the hard work in vain Dr. Webber and now it seems now he will be stuck in the hospital forever with the residents, who have planned a Thanksgiving dinner ordering food from KFC.

Here’s the catch to this much happening episode, which turned the entire season around. We remember how Shane had convinced Christina to use Meredith’s 3-D printer to produce a conduit for their baby patient. Well, that conduit gets contaminated and now they want the printer again. Once again, Meredith (who is not herself after her argument with Yang) doesn’t allow them to use it again as her research is getting hampered. And so, when she denies further, Shane defends Yang big time and Christina kisses him. We knew something was up there, didn’t we?