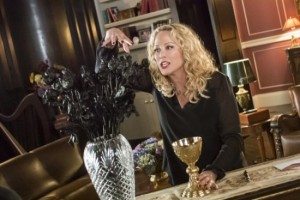 When Ingrid and Freya first learned that they’re witches and that they’re descended from a long and powerful line of witches, their reaction was understandably not enthusiastic. They had been lied to for the entirety of their lives and in Freya’s case, she was made to feel as if she was going insane when in actuality, she knew who she was from a young age; those are the type of things that take a while to process and understand. Ingrid may still be attempting to reconcile who she was with who she is, but Freya quickly grew to appreciate her power, growing it whenever she had the chance and seemingly embracing the new turn her life had took.

On the next episode of Witches of East End, Freya is still without her power after it was stolen by Penelope, so she turns to a mysterious professor with a connection to the Beauchamp family in order to retrieve her power. Not only is lacking the ability that she’s been crafting for months another sudden turn that would take time to get used to, it comes at an entirely inopportune time, with the shifter getting closer to her family and the supernatural presence in East End only rising by the day. For the Beauchamps to be able to triumph over Penelope and protect themselves from any other impending threat, they’re going to have to be at full strength, so until Freya gets her power back, they’re as vulnerable as they’ve been since Joanna filled the girls in on who they really were.

Elsewhere on Witches of East End, Killian makes a decision about his future in East End, Mike reveals a theory about witches and his search for answers to Ingrid, and Dash tries to solve the mystery of the catacombs.

What do you think it will take for Freya to get her powers back? Is Mike getting too close to finding out about the existence of witches in East End? Just how deep does the mystery of the catacombs go?