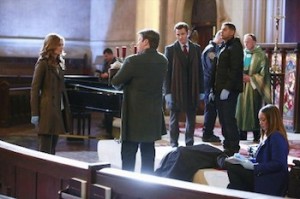 “The Good, The Bad and the Baby” was fan fiction brought to life. Monday night’s episode of Castle was fantastic and I’m sure I’m not alone in saying this, I cannot wait till Castle and Beckett have a little one of their own.

The case this week was great, but to be honest, I felt like it was the B plot and I didn’t mind one bit. I just wanted to see everyone interact with baby Cosmo. Yes I know, his name was really Benny, but I just adored the fact that Castle named him Cosmo, and dressed him up in the cutest turkey onesie. Castle was really adorable holding the baby, and even more adorable after he dubbed himself having a RHD in child care, “Ruggedly handsome dad.”

There were so many amazing lines and moments from “The Good, The Bad and the Baby” I’m surprised my head didn’t explode. I do have to say, Alexis totally won the episode. Her line, “How long have I been gone?” after walking into the loft and seeing Martha feeding Cosmo and Castle and Beckett passed out on the couch had me in stitches. I’m smiling like a little school girl just thinking about that scene. Castle volunteering to take in baby Cosmo was the best idea he’s probably ever had. 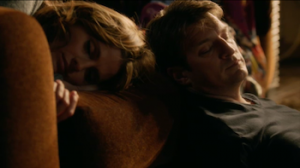 Kate reading a baby book, and Castle bribing baby Cosmo to stop crying were two things I thought I’ d never see. Cosmo puking on Castle and then Kate holding the little one was hilarious. I really loved while Kate was holding Cosmo, a version of Caskett’s theme played in the background and Kate had this amazing smile while looking at Castle. You could totally tell she was thinking, “Hey, maybe I can do this whole baby thing with Castle.” I just found that moment so sweet. Kate was so not a baby person but she definitely grew to be one by the end of the episode. I do have to say, the way Castle and Beckett changed Cosmo’s diaper was awesome. They were doing it like they build theory together. Castle and Beckett make such an incredible team. I love watching earlier episodes and then recent ones just to see how far they’ve both come as individual’s and as a couple. Let me point out how adorable it was that Castle and Beckett had probably their most important conversation to date while Beckett was standing in a dumpster.

I really felt for Castle when he was telling Beckett how Meredith wasn’t around and he pretty much raised Alexis on his own. Castle thought taking in Cosmo was a good way of getting Kate comfortable around a baby. My heart really melted when Kate told Castle, “When the time comes, there is no way I’m gonna let you take care of our baby on your own.” I really did love that Kate didn’t shy away from the baby talk with Castle even though she wasn’t really a baby person. Beckett has grown so much as a character since the beginning. It really is fantastic. They are going to make great parents, if they do have children. Just thinking about it is making me giddy.

Other then Castle and Beckett’s adorableness with baby Cosmo, we got to see Ryan interact with the little one. It was both adorable and hilarious. Ryan really believed he was ready for fatherhood, but freaked out every time Cosmo would start to cry. I loved that Esposito had to talk Ryan down. Javier told him that no one’s really ready for parenthood. Ryan’s just going to have to learn as he goes along. Ryan cares and he’ll be just fine.

I loved that Lanie got to spend a little time with Cosmo. Her baby talk while holding him was too cute and she seemed like a natural with baby Cosmo. Captain Gates even got to spend time with Cosmo. There’s something really incredible about a baby and the way even the toughest adults turn to mush around them.

Ryan was absolutely hilarious this episode with his obsession with the huge lottery jackpot. I would even say it helped with the solving the murder of Cameron Ducane. It looked like Cameron and his crew fixed the lottery but that wasn’t the whole story. Cameron’s boss pressured Cameron into the plan because he found out about Cameron’s criminal past and threatened to fire him and jeopardize everything him and his wife were trying to build. Even the head of security of the building was in on the plan. They took Miranda Vail, the lottery announcer’s baby, Cosmo/Benny and her husband Paul as hostages. They made her switch the briefcase with the briefcase with the fixed balls. Cameron ended up saving Cosmo/Benny’s life by taking him and running. Thus sacrificing his own life for Benny’s. The families reunion with Benny was heartwarming.

Another hilarious moment belonged to Alexis when she told Castle and Beckett if they have a baby in a few years, and she has one also, both babies could grow up together. Thus ruining that whole moment. I couldn’t help but laugh out loud. As if the whole episode wasn’t already cute and funny, the last scene with Beckett dressed up as Pocahontas took the cake. Castle was only kidding about the whole dressing up thing but Kate was prepared and made Castle dress up as a pilgrim. “Better put this on, Pilgrim.” Kate seriously rocks! Gotta love that high five she gave Martha. Just an all around fantastic mid season finale episode.

Terri Edda Miller is an absolute genius. She knows exactly what the fandom wants and delivers in spades. In fact, the whole writing staff, directors, actors, everyone involved with this show have been absolutely amazing. Castle is in its 6th season and I see no signs of it slowing down. Monday’s episode proved just that. I have liked every episode this season so far, (some more than others) but I’m going to say “The Good, The Bad and the Baby” is my favourite this season. It definitely has earned a purchase on iTunes and a permanent spot on my iPod so I can watch it over, and over and over again. I just have to survive till the show comes back in January 2014.

What did you guys think of the episode? Sound off below. Check out some funny lines from the episode. If I missed any, write them below.

Memorable lines from this episode:

“I’m sure I’ll feel differently when we have one of our own.” – Kate

“Must be hungry too, he keeps on going for the girls” – Lanie

“Who could blame him?” – Castle

“What do you say Beckett? Wanna have a baby? Come on, it’ll be fun!” – Castle

“When we do this, let’s not do the dead body in the middle of the aisle.” – Castle

“You see this face? It’s the face of your future.” – Castle